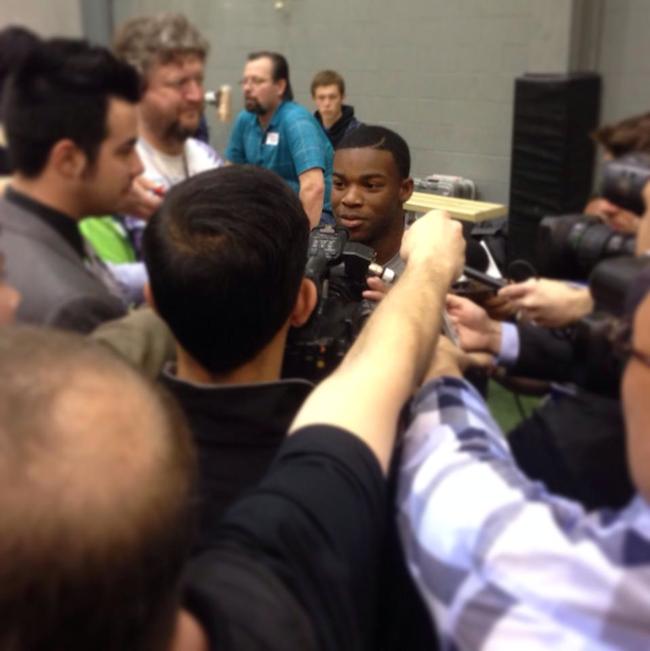 Mizzou Football sent a record seven players to the 2014 NFL Combine and is one of the most talked-about programs in the country. As a result, major networks like Fox Sports 1, ESPN and NFL Network were in Columbia on Thursday for Mizzou’s Pro Day.

Needless to say, they were all impressed.

“I think Mizzou’s Pro Day actually, not to slight all the other schools we’ve been to, but I think it was the most efficiently run Pro Day that I’ve ever been to,” ESPN Analyst Kelly Stouffer said.

It wasn’t only the event Stouffer was impressed with. The players are what really stole the show. From the weight room in the MATC to Devine Pavilion, there were cameras everywhere.

“There’s a lot more cameras than there were at my Pro Day last year,” said former Mizzou defensive lineman Sheldon Richardson. “There’s a reason why the cameras are here today, and there’s a reason why it’s televised live. Kony Ealy, Michael Sam, James Franklin, Henry Josey, everybody’s been ballin’. It’s been a great year to watch them play football. “

And as much as the media and former Tigers enjoyed the show that Mizzou and its 2014 draft hopefuls put on, no one had more fun than the Pro Day participants themselves.

“Overall today, everybody did good,” running back Henry Josey said. “We had a great time with each other, we had fun, and we enjoyed doing what we love doing, and as a result, everything just came easy to us.”