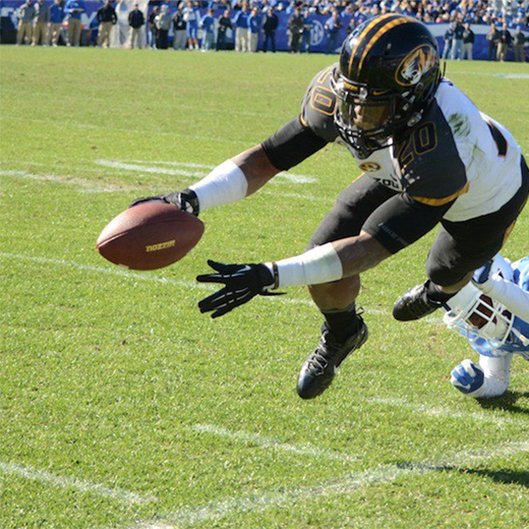 One of the “feel-good” stories of the year who will have people all over rooting for his comeback from a devastating knee injury late in the 2011 season which stopped short a huge successful year for him … Sat out all of 2012 recovering from multiple surgeries and did a stellar job during the rehabilitation process … After successfully returning to full contact this spring, he’ll look to regain the form which saw him rush for nearly 1,200 yards in just 10 games as a sophomore … He begins fall drills listed atop the depth chart, where there is a lot of exciting talent ready to push him.

Sat out the season while continuing recovery from knee injury sustained late in 2011.

Suffered a season-ending knee injury against Texas … Despite the injury, totaled the fifth-best rushing season in team history with 1,168 yards, nine touchdowns and an 8.1 ypc average … At the time of the injury led the Big 12 Conference and ranked fifth nationally in rushing (finished 2nd and 12th, respectively) … Led the team with 7.2 yards per carry against Miami (Ohio) in the season opener … finished the game with six carries for 43 yards … broke off two runs of more than 10 yards, one 11 yards and the other 12, with both coming in the second quarter … led all rushers in Missouri’s game against Arizona State with 94 yards on nine carries, good for a 10.4 average … helped the Tigers tie the game at 16-16 early in the second half after picking up 36 yards on a reception … finished the game with two catches for 51 yards … with Mizzou backed up deep in their own territory late in the fourth, Josey rumbled for 39 yards to get the Tigers near midfield … became just the fourth Tiger in history to have a 35-yard run and 35-yard reception in the same game … ran for 263 yards and three touchdowns on 14 carries against Western Illinois, averaging 18.79 yards per attempt in just one half of work … his 263 yards was the highest single-game output in the NCAA to that point, and was the fourth-highest single-game total in MU history … scored from six yards and 21 yards out in the first quarter before breaking off a 68-yard score with 52 seconds left in the first half … earned co-Big 12 Offensive Player of the Week honors for his showing against the Leathernecks … exploded for 133 yards rushing on just 14 carries against Oklahoma, good for an average of 9.5 per carry… recorded a touchdown on a 48-yard scamper in the fourth quarter against the Sooners … carried the ball 12 times against Kansas State, picking up 55 yards on the ground with a score … crossed the century mark for the third time this season, rushing the ball 19 times for 129 yards and a touchdown against the Iowa State Cyclones … also opened the game with a 43-yard kickoff return, which was the longest of the year for Mizzou … carried the ball 25 times for 138 yards against Oklahoma State for his fourth 100-yard game of the season and a personal best in conference play … topped that performance a week later with his third straight 100-yard rushing game in conference play, totaling 162 yards on the ground against Texas A&M … scored on an 11-yard run in the fourth quarter to give Missouri their first lead of the game since it was 14-7 after the first … rushed for 132 yards on just 15 carries at Baylor for this fourth straight 100-yard game … scored twice in the first half on scampers of six yards and two yards…

Was named the team’s freshman of the year for his contributions to MU’s 10-win season … Was 2nd on the team with 437 rushing yards, and his 5.8 average per carry tied for best on the team among those with 25 tries or more … Burst onto the scene with a record-setting day in the home opener against McNeese State, running for 112 yards on seven carries and 3 TDs (6, 6 and 62 yards) … Scored on three of his first four carries … Was the first true freshman to score three TDs for MU since 1995 (Corby Jones) … Ran the ball eight times for 54 yards against Miami (Ohio) … Had a 28-yard TD run against Miami … Had a team-high 14 carries against Oklahoma for 64 yards … Also had one reception for nine yards against OU … Ran the ball nine times for 49 yards in the win over Kansas and scored on a 10-yard run in the 2nd quarter of the Insight Bowl against Iowa.

Starred as a running back and in a number of roles on defense … Ranked by Rivals.com as the nation’s No. 39 overall prospect in the athlete category … Also rated by Rivals.com as the No. 51 overall talent in the state of Texas this year … Was an all-district running back each of his last two seasons, while also earning all-district honors as a defensive back as a senior … On offense in 2009, ran for 1,369 yards and 15 touchdowns, while adding a pair of receiving scores as well … Preceded that with a junior season that included 1,267 rushing yards and 20 touchdowns … Prior to that, was an all-district linebacker as a sophomore, when he recorded 67 tackles … High school coach – Finis Vanover.