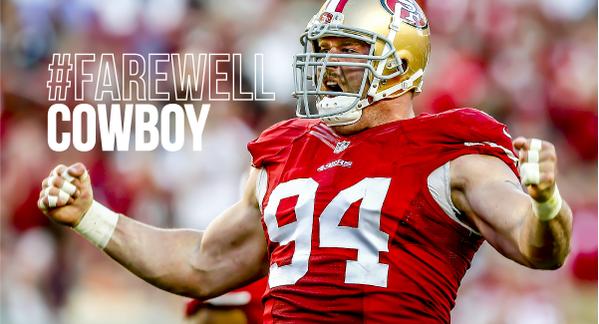 Mizzou Made defensive lineman Justin Smith retired on Monday, May 18, 2015 after 14 seasons in the NFL. The Cincinnati Bengals drafted Smith in 2001, where he played seven full NFL seasons before being signing with the 49ers in 2008. Smith has anchored the defensive line in San Francisco ever since, and helped lead the 49ers to a NFC Championship and trip to the Super Bowl in 2012.

Since joining the 49ers in 2008, Smith recorded 37.5 sacks, which ranks second most in franchise history and most among all NFL defensive tackles over that span. In 2011, Smith was named a First-Team AP All-Pro while gaining 7.5 sacks and became just the third player in franchise history to register at least 6.0 sacks in four consecutive seasons. In 2012, he was named Second-Team AP All-Pro at two different positions (DT & DE) after registering 130 tackles, 3.0 sacks, 1 forced fumble and 2 pass deflections. Smith, nicknamed “The Cowboy” for his blue collar and midwestern approach to his job, was also selected to five consecutive Pro Bowls from 2009-2013.

Smith was one of the most tenacious and dynamic defensive linemen to play for Mizzou, being named an All-American in 2000. As a sophomore at Mizzou, Smith recorded 92 tackles, 16 of those tackles for loss, and picked up 8.0 sacks tying the Mizzou single-season record. Smith was one of 19 players on the Bronco Nagurski Award watch list and one of only two sophomores. He was named first team All-Big 12 as well as Academic All-American and Academic All-Big 12. As a freshman in 1998, Smith became the first Tiger since 1986 to start every game and also was named Big 12 Defensive Freshman of the year. The Jefferson City, Missouri native also led Mizzou with 13 tackles for loss his freshman season and led the Big 12 rookies with 86 tackles.

Smith’s accomplishments at the collegiate and professional level show what it means to be Mizzou Made. Justin Smith will always be remembered as one of Mizzou’s most successful athletes as he will remain in the Mizzou Intercollegiate Athletic Hall of Fame. Congratulations Justin on a remarkable NFL career!

Watch the best of Justin Smith mic’d up

Be A Self Starter
Scroll to top