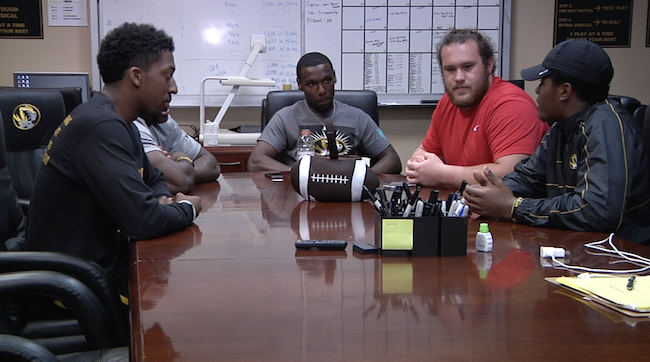 Lee hails from Lawrence Central High School in Indianapolis, Ind. He wants to go to medical school upon graduation, so he chose Mizzou for its outstanding academics, first and foremost. Mizzou’s first-rate coaching staff and their knack for producing NFL talent also factored heavily into the linebacker’s decision.

Zanders, a.k.a. Dr. Lee (see Drumline), is from Raines High School in Jacksonville, Fla. The coaches are what originally drew the quarterback to Mizzou, and once he arrived on campus for his official visit, he fell in love with the environment and family atmosphere.

Dennis is from Leyland, Miss. After graduating from Leyland High School, he attended Hinds Community College in Jackson, Miss. for three semesters. The cornerback developed a strong relationship with Coach Cornell Ford during the recruiting process, and once he experienced the brotherhood of the Mizzou Football Family, he knew Mizzou was the place for him.

Cheadle played his high school ball at Boehm’s alma mater, Lee’s Summit West in Kansas City, Mo. He watched Boehm win a state championship during his freshman season, and then made the Mizzou center proud by taking home a state title of his own as a senior. The cornerback grew up a Tigers fan, so as he put it, Mizzou has been home to him from the get-go.

Fun fact: Cheadle is the cousin of award-winning actor and producer Don Cheadle, who starred in Crash, Iron Man 2 and 3, and numerous other blockbuster hits.

After Boehm gathered a solid foundation on the new guys, he prodded into more pressing matters. First off, he asked Lee why he always wears a hat. As it turns out, the Indianapolis native is a hat collector, and has one to match just about every outfit he wears.

On the topic of fashion, Cheadle questioned Zanders about the capris that the quarterback supposedly rocks around campus. Rumor has it, he’s in the process of kilt shopping online to make his next fashion statement. Zanders denies any such rumors.

After Dr. Lee finished talking about the “Florida swag” that his style encompasses, the conversation switched to academics, and Boehm asked the newcomers about the hardest class on their schedule.

Cheadle and Zanders both mentioned English 1000, saying the biggest difference from high school to college is the amount of weight that the tests carry. Unlike high school, where homework can save you, exams tend to determine the majority of your grade in college, especially in freshman-level courses.

To round out their chat, Boehm asked each of his teammates to give one bit of advice to incoming Tigers.

“If you’re from Florida, just bring anything warm,” Zanders said. “I went to class my first day, and I swear I had frostbite.”

“Be in shape,” Dennis said, as he reminisced about the infamous Mat Drills.

“Drop your ego,” Cheadle said. “It’s really a humbling experience coming in here. Just come in hungry and ready to learn. If you come in with the attitude that you’re bigger than the team, the coaches will knock you down. Once you get to college, none of the stars, honors, or awards matter. Be ready to work.

“Drop the ego, and be willing to learn as much as you can,” Lee said, building off Cheadle’s advice. “They don’t tolerate ego here. You’re not the man here like you were in high school. Try and keep a positive attitude and be ready to work for the team.”