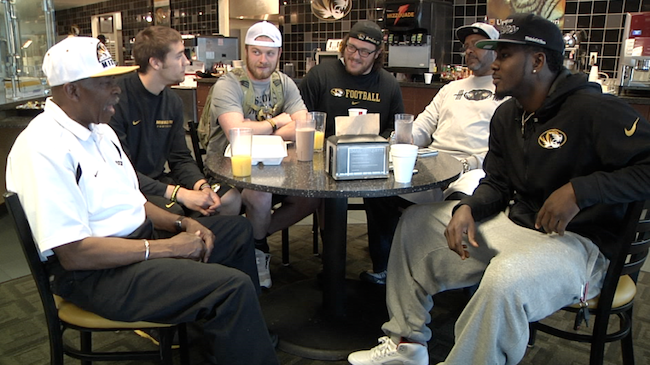 Zou Unit is your source for the inside scoop on Mizzou Football. Each week, Zou Unit will give you a behind-the-scenes look at a different aspect of the football program, from facility tours to exclusive interviews. On April 10, junior offensive lineman Evan Boehm chatted with two MATC chefs, Bernard and Mr. Hill, over breakfast.

Bernard has been working at the MATC dining hall for six years. His favorite part of the job is interacting with all the athletes, especially football players, as he himself played football in high school.

Mr. Hill has been around a little longer. He started cooking for the athletic department in the 1960s, and in the 50+ years that have passed, he’s seen quite a few student-athletes pass through the doors. His favorite part of the job is watching them mature throughout their time at Mizzou.

Football players aren’t small. They love food, and they love a lot of it. To satisfy their gargantuan appetites, Bernard and Mr. Hill often have to go to extreme measures.

One day, former offensive lineman Elvis Fisher asked Bernard to make him the biggest omelet possible. When Bernard presented him with the enormous bundle of eggs, he said Fisher’s eyes nearly popped out of his head. It’s unknown whether Fisher finished the giant concoction, but we’re sure the 6-foot-5 295-pounder found room somewhere.

While Bernard takes care of the omelets, Mr. Hill’s specialty is pancakes. A couple weeks ago, he made one the size of a 16-inch pizza — needless to say, the football players were impressed.

Wide receiver Levi Copelin had a non-food related question for the two men: Batman or Superman? Both prefer Superman, much to the delight of quarterback Maty Mauk.

Boehm is a Batman fan, so he quickly changed the subject and asked the two who their all-time favorite football player is. Bernard is a Terry Bradshaw fan, while Mr. Hill showed his Kansas City pride and went with former Chiefs receiver Henry Marshall.

Make sure to check back next Thursday to see the Mizzou Football Family go on an Easter egg hunt in the third episode of Zou Unit. And pay attention to Darius “Money” White’s shoes — if he repeats a pair, he has to do “up-downs.”