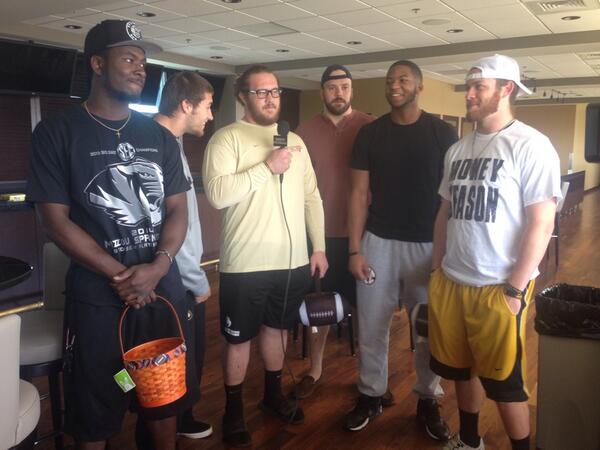 ZOU Unit is your source for the inside scoop on Mizzou Football. Each week, host Evan Boehm will give you a behind-the-scenes look at a different aspect of the football program, from facility tours to exclusive interviews.

This week, we get to see how Mizzou Football celebrates Easter: with an epic Easter egg hunt inside the press box at The ZOU.

The Mizzou family split into three teams to search for a total of 12 plastic football eggs filled with Reese’s eggs. Boehm paired up with offensive lineman Mitch Morse, wide receivers Bud Sasser and Levi Copelin matched up, and quarterback Maty Mauk and wide receiver Darius White made the third team.

As they searched for eggs, the team also found slips of paper with fun-facts about Mizzou Football, like this one:

“Mizzou Football has a 97% graduation rate and the No. 1 academic progress rate in the SEC.”

After searching high and low throughout the press box, the ZOU Unit reconvened to count their eggs. Boehm and Morse found two eggs, Sasser and Copelin had three, and Mauk and White found seven although they accused Sasser and Copelin of stealing their eighth.

While enjoying their prize of Reese’s eggs, the team talked about their favorite types of candy. Boehm and White said Reese’s is their all-time favorite and Mauk added that he also likes Snickers. Sasser said his favorite is Hershey’s Cookies’ n’ Cream, and Copelin said he prefers the classic Hershey’s Milk Chocolate. Morse agreed with just about everyone, but eventually settled on Rolo’s as his favorite.