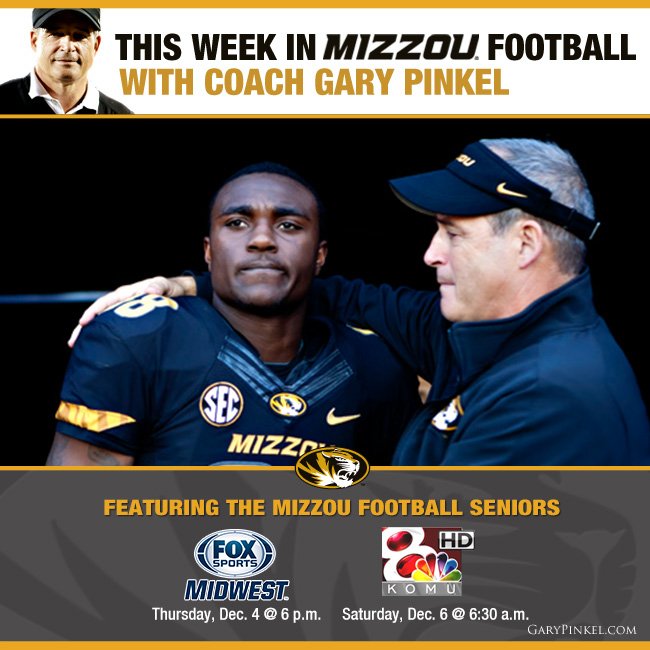 The newest edition of “This Week in Mizzou Football” will feature the Mizzou Football seniors. The Mizzou Football Family helped the seniors celebrate Senior Night by defeating Arkansas 21-14 in the first annual Battle Line Rivalry at The ZOU on November 28 to clinch the SEC East Division.

Mizzou Football will get its second shot at playing in the SEC Championship Game on December 9 against Alabama. Since joining the SEC three years ago, Mizzou Football has now clinched back-to-back SEC East Division titles.

While the Mizzou Football seniors’ journeys are coming to a close, they have all formed lasting friendships that go far beyond football. Head Coach Gary Pinkel has developed a strong family atmosphere in his program, which continues to attract recruits from around the country. The players are teammates, but more importantly, they are brothers. To instill this brotherhood, each freshman player is given a “big brother,” which gives them the opportunity to meet and be mentored by some of the upperclassmen.

This week’s show will air at 6 p.m. Thursday, December 4, on Fox Sports Midwest and again at 6:30 a.m. Saturday, December 6, on KOMU. Check GaryPinkel.com every week for updates regarding when and where to watch This Week in Mizzou Football.

Watch the Mizzou Football seniors this Saturday, December 6, as they take on Alabama in the SEC Championship Game in Atlanta. Kickoff is set for 3 p.m. CT and can be seen on CBS. Fans can follow Mizzou Football on Twitter, Instagram, and Facebook and listen in via Tiger Network radio affiliates for updates throughout the game.