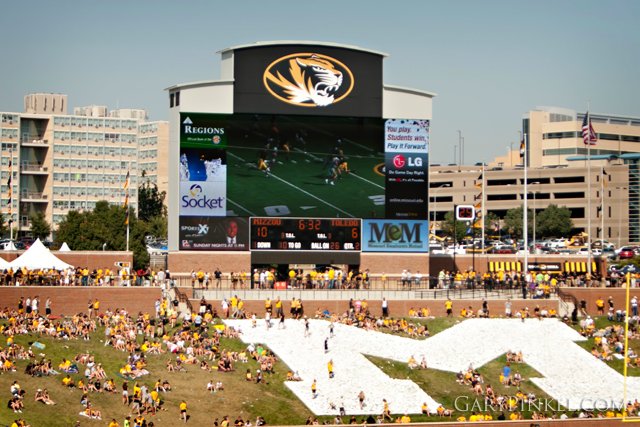 Mizzou Tiger football fans have one more reason to look forward to the 2014 season: Truman’s Terrace. The new tailgating area is set to open along with the rest of The ZOU’s east side expansion in time for Mizzou’s first home game against South Dakota State on August 30.

Truman’s Terrace is located on the southeast side of the stadium, where the Amphitheater at Mizzou formerly was. The space is designed to be the perfect place for pre and post-game tailgating parties and where fans can watch the game from a tiered hillside while enjoying catered food and beverages from a buffet and a la carte cash bar. There will be a television viewing areas, social lounge and live music, as well as tables and chairs for fans to sit, eat and enjoy the atmosphere of Mizzou Football.

Because the new tailgating area is within the confines of The ZOU, guests will need a ticket to enter. A Truman’s Terrace ticket will allow fans access to tailgate two hours before kickoff and one hour after the game ends. Fans can purchase an individual season membership to the terrace for $200, which includes entry into the terrace for all of Mizzou’s seven home games.

Groups can rent an exclusive private tent to accommodate 25-50 people for single games. This rental includes use of a tent, tables, chairs, catering, non-alcoholic beverages and a limited number of parking passes. On-site staff members will take care of all set-up and breakdown for this area.

Tickets are now on sale for all Mizzou Football home games. Purchase tickets online, in person at Mizzou Arena or by calling 1-800-CAT-PAWS.