The 2014 Tigers on the Prowl “Tigers Unleashed” event took place Friday, July 11, at the Columbia Mall. 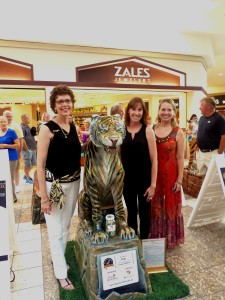 Tigers on the Prowl, which is hosted this year by Head Coach Gary Pinkel, allowed 12 local artists to paint a life-sized tiger statue. The Tigers will be featured around mid-Missouri throughout the summer, and they will be auctioned off at The Crossing in October to benefitvarious charities. Last year, Tigers on the Prowl raised $47,000 for local charities.

The tiger, named “Rah,” features a number of Mizzou Football principles and pieces of memorabilia. The base of the tiger is a sort of time capsule, containing rocks from the “Rock M Hill” and a jersey worn during a Mizzou Football game. The tiger is also painted with the words to the Alma Mater, Every True Son, Fight Tiger, and a Mizzou Made emblem. One side of the tiger represents academic excellence, with the other representing athletic excellence.

Mizzou Football fans can find all 12 tigers around Columbia this summer, or donate online to their favorite tigers.