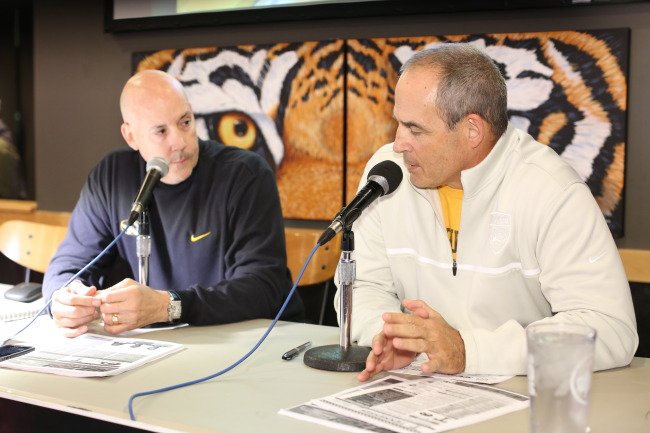 Once the two defensive backs had gone on air, Pinkel did not hesitate to steal a chicken wing from Singleton’s plate.

Kelly began the show by introducing the two players and their similarities. Both Dennis and Singleton had the dream of playing Division I football but had to wait a few years for that dream to become a reality. They attended junior colleges before being recruited by Mizzou Football. 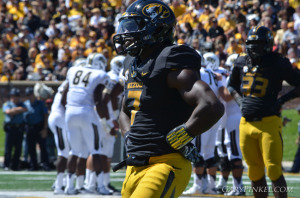 After a few years at a junior college, Dennis’ second recruitment was a decision for the future.

“During my second recruiting process I knew I was going to go somewhere and eventually graduate, so I immediately looked at the graduation rate at Missouri and it was pretty high.” Dennis said. “I was also looking for great teammates and great coaching.”

When it comes to education, Mizzou Athletics continues to set a high standard for student-athletes. Mizzou has improved its NCAA Graduation Success Rate for nine straight years, and Mizzou Football has graduated 97 percent of its seniors over the past five years. 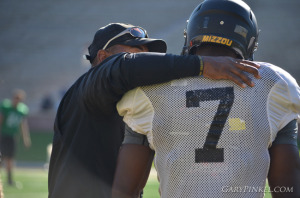 Dennis, a Leland, Mississippi, native, found a home at Missouri through the people and the coaches.

“It was a brother atmosphere.” Dennis said. “My host was Markus Golden and he was telling me different things that made him come and it just made me feel like I was at home.”

Kelly turned the focus to Singleton, who also went through the process of recruiting from junior college to a Division I school. He described the connection he felt with the Mizzou Football Family the minute he arrived.

“The recruiting weekend was great. My host was L’Damian Washington and he’s an awesome guy,” Singleton said. “He is one of the reasons I came here.”

“Both of those guys are really good athletes and we thought they would immediately help us.” Pinkel said. “They understood that it was all about competition and they’re great competitors. They don’t mind that they have to compete.”

Singleton, a New Orleans native, also opened up about his first-hand experience with Hurricane Katrina in 2005. 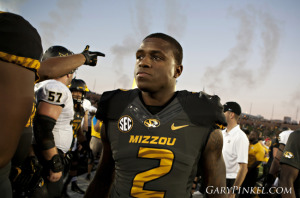 “It was a tough time, not knowing if we would have a place to come back to.” Singleton said.

When Kelly asked Singleton where he found his strength to get through hardships, Singleton had a simple answer.

“Faith,” Singleton said. “I’m a big believer in God. I feel like with God you can go through anything.”

Singleton and Kelly also discussed the beauty of discipline within the Mizzou Football Family.

“It shapes who you are.” Singleton said. “It helps you be grounded in what to do and what not to do.”

When asked what it takes to win games, both on the road and at home, Pinkel had one solution.

“Focus,” Pinkel said. “I don’t care if its played here, or in the parking lot. It’s all about your ability as an athlete, regardless of where you’re at, to be able to focus and give your best performance on that play.”

Focus is not an easy task, but Pinkel emphasized how crucial it is in order to win games and strengthen a team.

“That’s why we train our athletes to learn how to think and compete.” Pinkel said. “That’s ultimately the toughest thing and hopefully we get that done.” 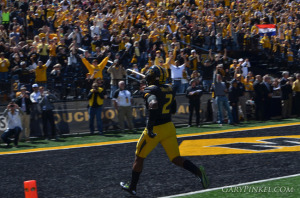 Pinkel also explained the impact fans have on a team’s success.

“There’s a commitment that we have to have as players and coaches committed to doing their best in order to compete in this great league, but there’s also a commitment from our fans.” Pinkel said. “That’s filling our stadiums up, and it’s traveling every game. We’re doing a lot of great things and we’ve made a lot of great progress, and we still want to continue to make more progress.”

As the interview ended, Kelly asked Pinkel about the upcoming game in Knoxville, Tennessee.

“They’re playing really well.” Pinkel said. “Again, a great challenge for us, but what it’s going to boil down to is how we play.”

Watch Tiger Talk live at 7 p.m. every Monday at Buffalo Wild Wings, or watch online via the GaryPinkel.com livestream. See Mizzou Football take on Tennessee at 6:30 p.m. CT on Saturday, November 22, on ESPN. Follow Mizzou Football on Twitter, Instagram, and Facebook for updates throughout game day in Knoxville, Tennessee.

The Law of the Playmaker
Scroll to top