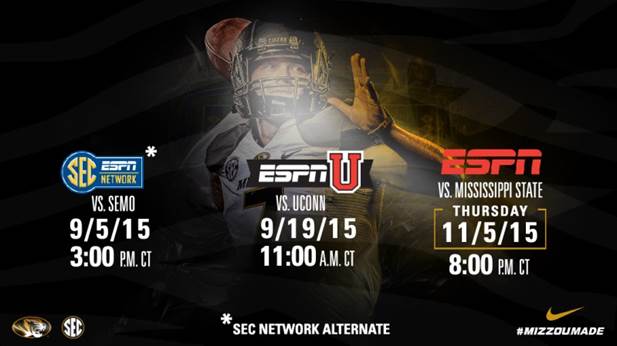 COLUMBIA, Mo. – ESPN and the Southeastern Conference announced game times for 32 college football games this fall and three Mizzou football games were selected to air on the ESPN family of networks. The Sept. 5, season-opener against in-state foe Southeast Missouri is set for a 3 p.m. CT kick on SEC Network (alternate channel) and Mizzou’s contest vs. UConn on Sept. 19 is set for 11 a.m. (CT) on ESPNU. Both nonconference games will be played at Memorial Stadium in Columbia. Lastly, Mizzou’s Thursday night game against Mississippi State at Memorial Stadium on Nov. 5 is slated for an 8 p.m. CT kick in from of a national ESPN audience.

With the announcement, Mizzou now has game times for five of 12 games this fall as the Sept. 12 contest at Arkansas State will air on ESPN3 at 6 p.m. And of course, the State Farm Battle Line Rivalry at Arkansas will kick at 1:30 p.m. on CBS on Nov. 27.