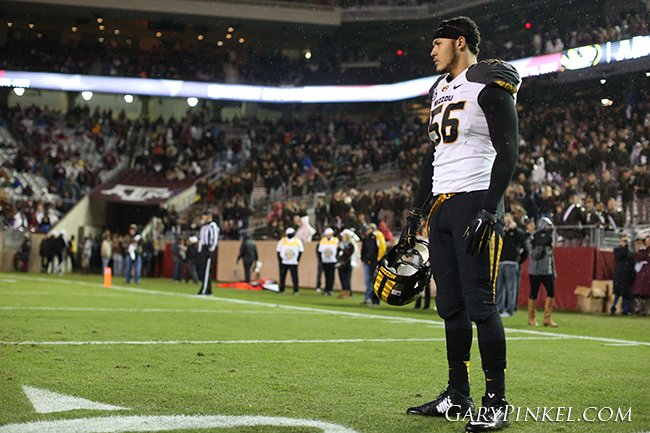 Football fans young and old have followed premier junior defensive end Shane Ray from the beginning. Recently, Ray broke the Mizzou record of single-season sacks, racking up 12 sacks and surpassing the record of 11.5 that NFL first-round pick and current San Francisco 49er Aldon Smith set in 2009 and Unanimous All-America Michael Sam matched in 2013. Even though he’s already broken the sack record, Ray, who was recently named team MVP, continues to set high goals — after all, that’s what got him here in the first place

Ray’s strength and determination is evident not only on the football field. While he has excelled at the sport, his character has been nurtured through personal experience, and that has made all the difference in his success.

In Mizzou’s history, there has been more than one Ray in The ZOU. Shane’s father, Wendell Ray, was a former defensive end for Mizzou Football and was drafted by the Minnesota Vikings in 1981. However, Shane wasn’t raised around father’s athletic legacy.

“One of the biggest things that I dealt with growing up was the absence of my father,” Ray said. “Now, we have a great relationship, but growing up it was really tough for me not really having that figure there.”

In place of his father, Ray’s mother, Sebrina Johnson, was his everything. She was determined to give Ray the best life possible and to give him a bright future.

“My mom sacrificed over and beyond for me,” Ray said.

Ray is grateful to his mother for the opportunities she helped make for him. Although Ray and grew up in a rough part of Kansas City, his mother didn’t let the obstacles that came with their geographic location get in the way of his success.

“Just because you’re from that environment, doesn’t mean you have to be of that environment,” Johnson said. “And with my child, I looked at him and said I am going to give him everything that is good in me.”

Ray’s tickets to success were school and football. He excelled at both, despite his father’s distance. When it was time for Ray to pick a college, it was not an easy decision, but once he realized his mother would be close enough to watch him play football at Mizzou, his decision was finalized.

“When I look at Shane now, the whole football thing, it’s awesome and it’s incredible, but I’m more proud of the person he is,” Johnson said.

Ray’s character shined through as he reconciled his relationship with his father. After being honest about the emotional impact his father’s absence had made, there was true forgiveness despite the hurt.

“I was able to forgive him because he looked at me in the eyes and he apologized,” Ray said. “One of the biggest things I had to set for myself was to let go of all that anger and aggression that I was facing.”

Ray has been able to witness healing and love in his family, and now, he’s looking ahead to the future and the bright opportunities it holds — especially the opportunity to play in honor of his parents.

“Now I have my eyes set on the SEC record,” Ray said. “When I go out there and play, it’s for them.”