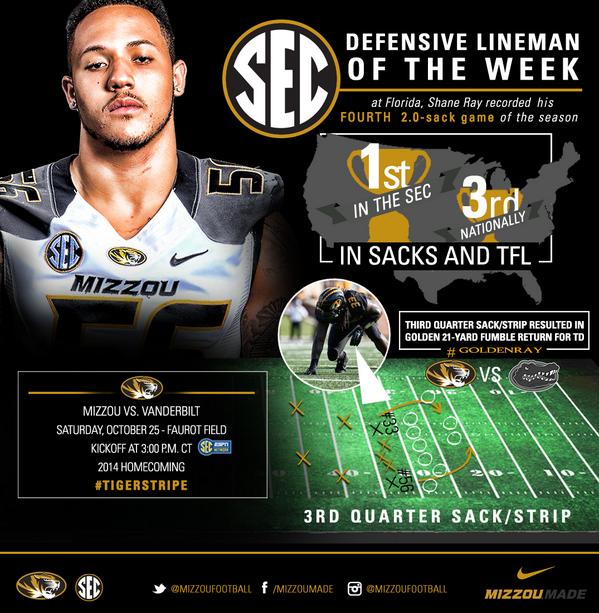 Ray has been named the SEC Defensive Player of the Week for the third time in seven games this season after Mizzou Football’s 42-13 win against Florida.

Saturday marked Ray’s fourth two-sack game of the season, one of which led to a 21-yard scoop-and-score by Markus Golden. Ray also had six tackles and a quarterback hurry on Saturday night. He now has 10 sacks and 14 tackles for a loss.

Ray was first named SEC Defensive Player of the Week this season after Mizzou’s win over University of Central Florida last month, when Ray racked up 7 tackles (4 tackles for loss), two sacks, and a forced fumble. He also received the honor after Mizzou Football’s game against South Carolina, in which he recorded 8 tackles and 2 more sacks.

This Saturday’s game against Vanderbilt is set for a 3 p.m. CT kickoff in The Zou and will be televised on SEC Nework. Fans can follow Mizzou Football on Twitter, Instagram, and Facebook for updates throughout the game and tune into Tiger Network radio affiliates.