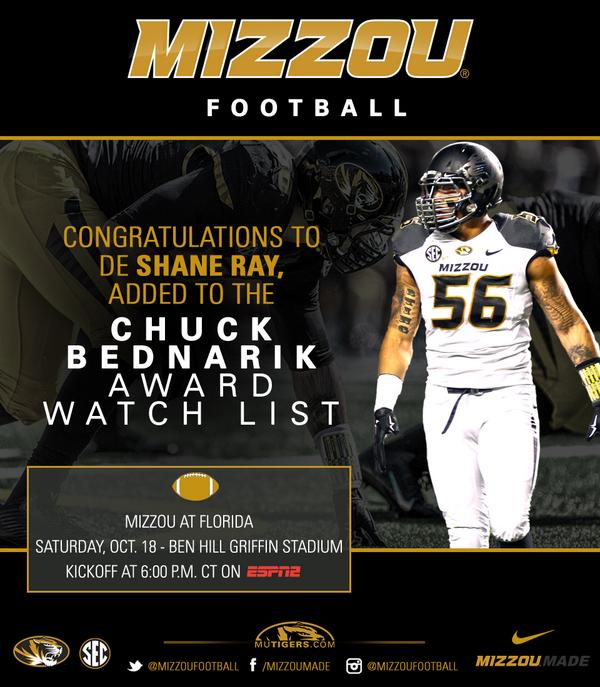 Mizzou Football’s Shane Ray has been added to the Chuck Bednarik Award watch list. The award is sponsored by Maxwell Football Club and includes the names of some of the biggest and most productive NCAA defensive lineman. Ray has amassed eight sacks to go with 12.5 tackles-for-loss on the season. With his eight sacks, Ray is tied for the eighth-best in Mizzou Football history. Teammate Markus Golden is also on the list.

Semifinalists for the award will be announced on November 3, and three finalists will be decided upon on November 24. The Bednarik Award winner will be announced during the Home Depot College Football Awards show on December 11. A presentation will be made at the Maxwell Football Club Awards Gala, hosted by Tropicana Hotel & Casino Atlantic City, on March 13, 2015.

The award was instituted in 1995 and was named in honor of Chuck Bednarik. Bednarik is a member of both the 1969 College Football Hall class and the 1967 NFL Hall of Fame class.

Ray and the rest of the Mizzou Football family play the Florida Gators on Saturday, October 18, at 6 p.m in Gainesville. The game will be broadcast on ESPN2, and Mizzou Football will post updates throughout the game on Twitter, Instagram, and Facebook. Fans can also tune in to Tiger Network radio affiliates.