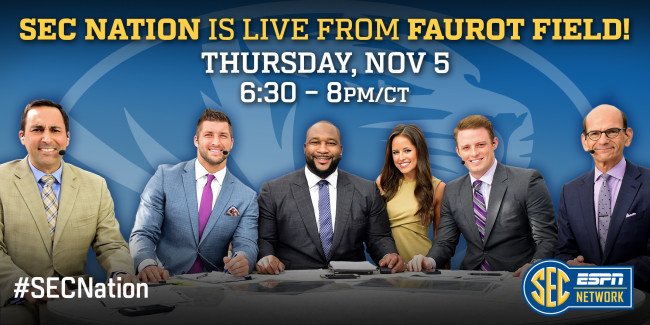 SEC Nation, the SEC Network’s traveling pregame show, is set to visit Mizzou Football on Nov. 5 prior to Mizzou’s nationally-televised contest against Mississippi State at Memorial Stadium, announced Wednesday by ESPN and SEC Network. The traveling show will air live on SEC Network at 6:30 p.m. (CT) that evening and Mizzou fans will be allowed to enter Memorial Stadium early at 6 p.m. via Gate 1 to watch the show, which will be live on Faurot Field. Fans will be limited to the North concourse of Memorial Stadium until the gates officially open at 6:30 p.m.

The SEC Nation appearance on Mizzou’s campus is the second in the program’s history and first since Nov. 1, 2014, prior to Mizzou’s 20-10 win over Kentucky. SEC Nation is hosted by Joe Tessitore, analysts Tim Tebow and Marcus Spears, and commentator Paul Finebaum.

The SEC Nation appearance is just another national television presence for Mizzou on Nov. 5 as the focus of college football will be on Columbia, Mo., that night in anticipation of ESPN’s Thursday night broadcast of the Mississippi State game. The contest will kick at 8 p.m. and fans are encouraged to visit MUTigers.com/Thursday for all information pertaining to the Thursday night game. It is Mizzou’s first Thursday night game since 2009.

Tickets for the Nov. 5 game vs. Mississippi State are still on sale via MUTigers.com or by calling 1-800-CAT-PAWS. Tickets are as low as $20 and a special Mississippi State four-pack is available, featuring four reserved tickets for just $24.75 per ticket ($99).

The Comeback of Anthony Sherrils
Scroll to top