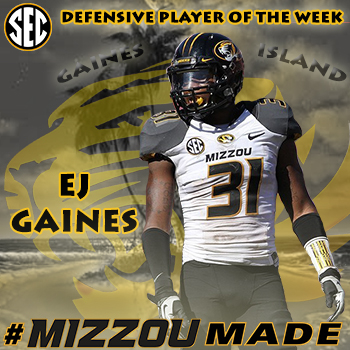 Gaines turned in an amazing lockdown coverage performance against Texas A&M standout wide receiver Mike Evans, as he held Evans to season-low totals of four receptions for just eight yards, which was a key part of Mizzou’s stellar defensive effort. Evans came into the game averaging 119.5 yards per outing, with 12 receiving touchdowns, and his long catch last Saturday in Mizzou’s win was just a 10-yarder.

Gaines finished Mizzou’s Senior Night with six total tackles, as the Tiger defense held the Aggies to 21 points and 379 yards of total offense, well below Texas A&M’s pre-game averages of 45.6 points and 552.6 yards. The senior Tiger ranks fourth in the SEC (31st in the NCAA) with his team-leading four interceptions to date, and he ranks third-best on the Tigers team with his 59 tackles on the season, despite missing two-and-a-half games due to injury.

The honor is the second weekly award of Gaines’ career, with the first also coming from an extraordinary outing against the Aggies. Gaines recorded 10 tackles and a career-best four pass breakups in Mizzou’s 38-31 overtime win at Texas A&M on Oct. 29, 2011.