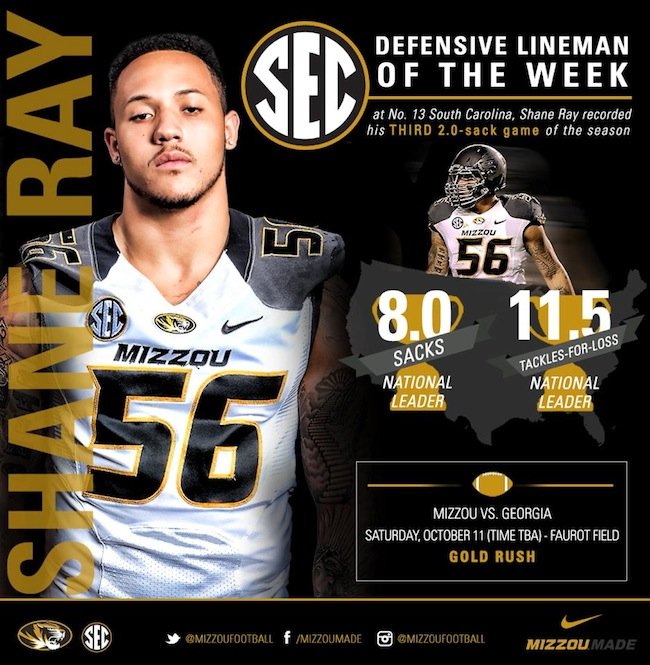 end Shane Ray’s latest performance, an eight-tackle, two-sack handling of the South Carolina Gamecocks, was impressive enough to earn Ray his second SEC award. The junior from Shawnee Mission, Kan., was named SEC Defensive Lineman of the Week for his performance in Mizzou’s 21-20 comeback win over South Carolina.

Ray won his first SEC honor after Mizzou’s 38-10 win over UCF, in which he recorded two sacks to go with 7 tackles (including four tackles for loss) and a forced fumble.

Ray’s eight sacks and 11.5 tackles for loss lead the nation, and he’s registered at least one sack in all five of Mizzou’s contests this season, including another two-sack outing against Toledo on September 6.

Ray and the rest of his defensive counterparts held a potent Gamecocks offense to season lows in several categories, including points, passing yards, total yards, and first downs. Mizzou’s defense didn’t give up a single yard to the Dylan Thompson-led Gamecocks in their last two series, setting up Maty Mauk and co. for a comeback drive.

Ray’s accolade marks the third time this year that a Mizzou player has won a conference award. Mauk, the sophomore quarterback from Kenton, Ohio, received the SEC Offensive Player of the Week award for his six total touchdowns and 325 passing yards against Toledo.

Following the bye week, Ray and the rest of the team will face the Georgia Bulldogs (3-1) on Oct. 11 for an SEC Eastern Division face-off.  Kickoff time is TBD. Check GaryPinkel.com or follow MIzzou Football and Coach Pinkel on Twitter for updates on where and when to watch the Tigers.

Mizzou Made in the NFL: Week 4
Scroll to top