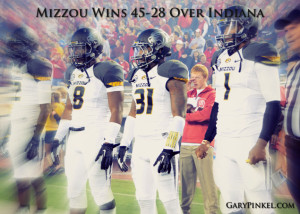 Going into Saturday’s game, Mizzou and Indiana were both averaging more than 48 points per game, so fans expected to see a lot of offense.

After 33 straight games with a forced turnover—the longest streak in the nation—fans also expected to see rock-solid defense from Mizzou.

After erasing a 14-0 first quarter deficit, the Hoosiers were trying to keep momentum and knot up the score at 21 going into halftime. But, Kony Ealy had other plans.

With 2:03 left in the half, the 275-pound junior defensive end got past his blocker and leapt up to snag the Hoosier quarterback’s pass out of the air. Ealy took the ball 49 yards the other way to the house.

Kony’s ultra-athletic play changed the game and boosted Mizzou to roll over Indiana 45-28.

“It changed momentum going into the half,” Ealy said. “The crowd got out of the game for a little bit there and that kind of gave some momentum to our offense to get out and just run the ball and try to score on them.”

That was the first of three interceptions for the Tigers, who now have a total of nine on the young season. Linebackers Darvin Ruise and Kentrell Brothers also picked off passes.

The Tiger defense built on this momentum and continued its strong play in the second half. It held the nation’s sixth-ranked offense to just two first downs and forced four punts over the first 24 minutes of the half. To put that into perspective, Indiana had punted a total of four times in its first three games, combined.

Mizzou’s dominance even forced Indiana’s quarterback, who entered the game seventh nationally in passer efficiency, to the bench. On the day, the former four-star recruit wound up 21-39 for 229 yards and a touchdown to go along with three interceptions.

In addition, Mizzou held the Indiana offense, which was averaging 50 points per game, to a season-low 28. It’s worth noting that this number would have been even lower if the Hoosier’s backup quarterback hadn’t thrown a 68-yard TD pass. The Tigers also limited the Hoosiers to 98 yards on the ground.

On the other side of the ball, James Franklin shined once again. The senior was nearly flawless. He completed 32 of his 47 attempts for 343 yards and two touchdowns. He also tucked it and ran 13 times for 61 yards and a touchdown.

Six different receivers hauled in Franklin’s passes. Marcus Lucas had a career day, corralling 10 balls for 101 yards, both career-highs. Dorial Green-Beckham continued his breakout campaign with eight receptions for a career-best 105 yards and a score. L’Damian Washington also found the end zone on a 14-yard pass from Franklin and ended the day with five catches for 77 yards.

Behind Franklin was a balanced rushing attack that saw all three running backs get at least 10 carries. Russell Hansbrough paved the way with 13 rushes for 104 yards, including a 45-yard touchdown scamper late in the third quarter. Marcus Murphy had a 10-yard touchdown run of his own to go along with 10 carries for 67 yards. Henry Josey rounded out the trio with 12 rushes for 47 yards.

The Tigers return home on Saturday as they take on the Arkansas State Red Wolves at 6:30 pm at the ZOU. The game will air on Comcast Sports South KMIZ.