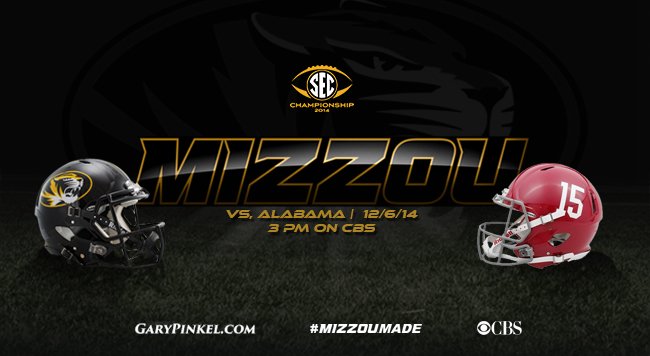 Mizzou Football (10-2, 7-1 SEC) will make its second-straight appearance in the SEC Championship Game this Saturday, December 6, when they take on the Alabama Crimson Tide at the Georgia Dome in Atlanta.

Mizzou is just the third team to win the SEC East outright in consecutive seasons since the conference split into two divisions 24 years ago.

Mizzou clinched its divisional crown with a 21-14 win over the Arkansas Razorbacks on November 28. It was Mizzou’s sixth-straight victory and 14th SEC win over the last two seasons, tied for most in the league with Alabama. The Tigers and Crimson Tide are also tied for the most conference division titles in the country since 2007, as each has claimed five championships during that span.

Aside from a culture of winning, Mizzou and Alabama share something else in common. Mizzou Head Coach Gary Pinkel and Alabama Head Coach Nick Saban were teammates on Kent State’s 1972 Mid-American Conference championship team coached by Don James.

James was hired by Kent State in 1971, when Saban was a senior defensive back and Pinkel a sophomore tight end. Saban joined the Kent State coaching staff as a graduate assistant the following season, and 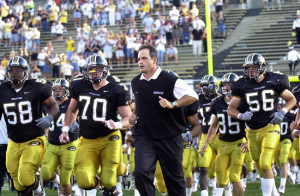 Pinkel followed suit three years later. Pinkel then followed James to Washington, where he was a tight ends coach for a year. Pinkel served 14 years under James before getting his first head coaching job at Toledo in 1991, where he stayed until he was hired at Mizzou in 2001.

Prior to the coaches’ first meeting as SEC foes in 2012, James told the Columbia Tribune that both men were like sons to him.

Pinkel’s 73 wins at Toledo and 113 at Mizzou are the most all-time at both universities, and his 185 career wins ranks as the sixth-most among active FBS-level schools. He attributes much of his success to James.

“He was my coach, my mentor, my friend, and he had such an amazing influence on my life, both personally and professionally,” Pinkel said. “The program we built at Toledo and here at Missouri is Don James’ program; it’s a tribute to how he developed men and built football teams.”

There have been few defensive end duos in the nation as feared as Mizzou’s Shane Ray and Markus Golden. Their 22.0 combined sacks and 36.5 combined tackles for loss are the most among any pair of defenders in the SEC. 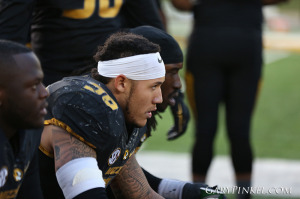 Individually, Ray leads the SEC in sacks (13.5), is tied for third nationally in TFL (20.5), and is one of only five players in the FBS with at least 2.0 TFLs in at least six games this season.

The rest of the defense has been stellar as well. Mizzou is coming off a game in which it held Arkansas to 288 yards, including just 133 passing and 155 rushing, the Razorbacks’ second-worst offensive output of the year. Over the last six games, Mizzou is allowing just 98.5 rushing yards per game and 281.5 total yards.

The Tigers’ D has also done a nice job of limiting high-powered offenses coming off huge games, as they have held their last four opponents to an average of 20.3 points fewer than the previous week.

On the offensive side of the ball, Maty Mauk has been on fire. Over the last five games, the sophomore quarterback is 89-of-163 for eight touchdowns and just two interceptions, and he has amassed 1,052 yards in that 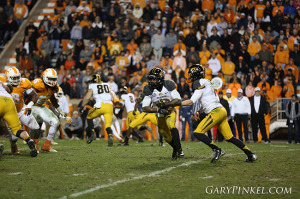 span. Even more impressive has been his performance in the fourth quarter. In the final 15 minutes of the last two games, Mauk has thrown three touchdowns, has completed over 77 percent of his passes, and has a QBR of 375.4.

Lining up behind Mauk will be Marcus Murphy. Murphy, who is a finalist for the Paul Hornung Award, is the only player in the FBS to score a TD this season in all four all-purpose categories: rushing (4 TDs), kickoff return (2), receiving (1) and punt return (1). The senior jack-of-all-trades is one of only four players with both a kickoff and punt return for a score in 2014. Murphy leads the SEC in kickoff return average (31.9 yards), is tied for the lead in kickoff return touchdowns, and his 82-yard punt return for a touchdown against Florida was the longest in the conference this season.

Kickoff for the SEC Championship game is set for 3 p.m. CT on CBS. Mizzou Football will post live updates on Twitter, Instagram, and Facebook throughout the game, and fans can also listen in via Tiger Network radio affiliates.