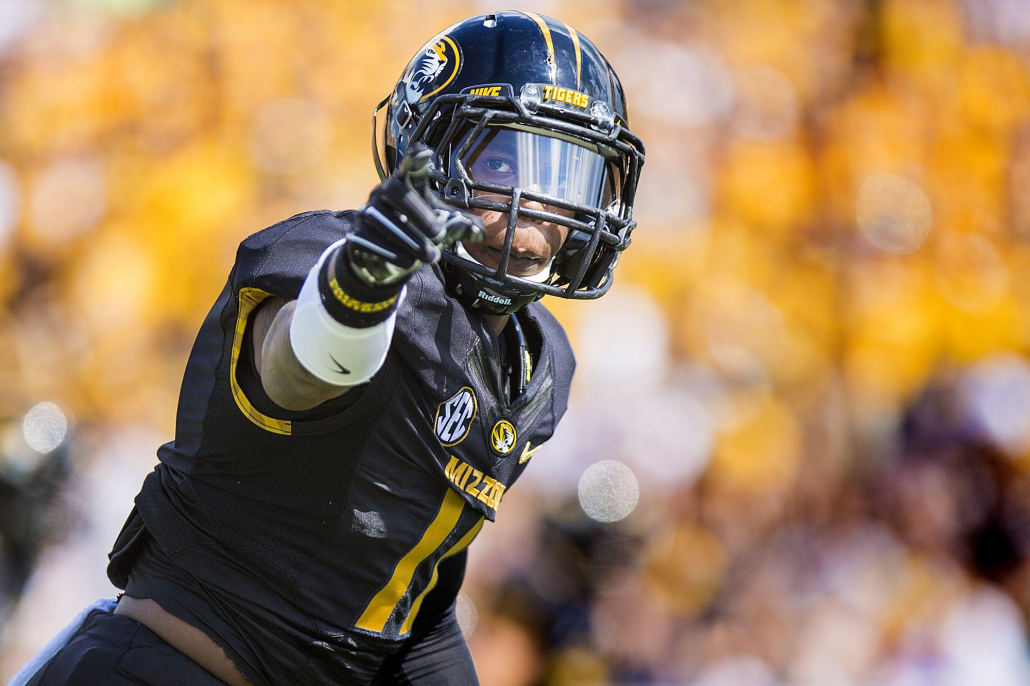 Mizzou (1-0) hits the road this week as they travel to Toledo, Ohio, to take on the Toledo Rockets (1-0) at 11 a.m. CT this Saturday, September 6.. Both squads are coming off home victories against top-10 FCS opponents. Mizzou took down South Dakota State by the score of 38-18, while Toledo defeated the University of New Hampshire 54-20.

Mizzou vs. Toledo In History

Mizzou and Toledo will be meeting for just the second time ever. The Tigers and Rockets squared off at The ZOU last season, with Mizzou winning it 38-23. The contest was tight throughout, as Mizzou held on to a 24-23 lead late in the third quarter. The Tigers put together a 75-yard touchdown at the end of the quarter to go up 31-23 and create some breathing room, and then Marcus Murphy found the endzone from 8 yards out early in the fourth quarter for the game’s final score.

One of the key factors in the game was Mizzou’s prowess in the turnover department. The Tigers forced three turnovers, all interceptions, including two inside their own red zone. Safety Matt White intercepted a tipped ball in the MU endzone right before the half, and defensive end Markus Golden had an equally crucial pick on Toledo’s first possession of the third quarter. Golden got into the backfield, tipped a pass attempt by the Rockets quarterback, snagged the ball out of midair, and took it 70 yards the other way for his first career touchdown. 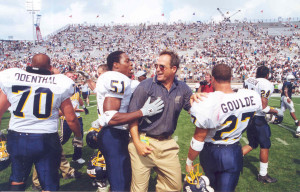 While Mizzou’s history with Toledo is brief, Head Coach Gary Pinkel’s history with the Rockets goes way back. Pinkel was the head coach at Toledo from 1991-2000 before taking the helm at Mizzou prior to the 2001 season. He is the winningest coach in history at both institutions—his 103 wins at Mizzou are a program-best, and his 73 victories at Toledo are also a school record.

Four Tigers to watch Saturday are running backs Russell Hansbrough and Marcus Murphy, wide receiver Darius White, and defensive end Markus Golden. All four had monster games in the season opener and will be looking to build on their stellar starts in game number two.

Hansbrough could not be stopped by the South Dakota State defense. The junior had a field day against the Jackrabbits, gaining a career-best 123 yards on 20 carries, including an incredible touchdown run on which he turned a potential three-yard loss into a 10-yard score. 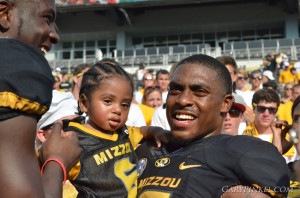 Murphy was spectacular in multiple facets of the game on Saturday. The speedy jack-of-all-trades gained 54 yards on the ground on just nine carries and hauled in three catches for 20 yards, but his biggest impact came on special teams. On South Dakota State’s first kickoff of the second half, Murphy fielded the ball at the Mizzou goal line, and took it 100-yards to the house to put the Tigers up by double digits and recapture the momentum for the home team.

White made his presence known early in his first career Mizzou start. On the Tiger’s third play from scrimmage, the 6-foot-3 senior ran a beautiful slant route and connected with quarterback Maty Mauk for a 44-yard touchdown. Less than seven minutes later, White found the endzone again, this time from 39 yards out, for his second career touchdown.

The Mizzou defense was dominant against the Jackrabbits, and Markus Golden was a big reason why. The explosive end led the Tigers with 10 tackles, including a career-best 3.0 tackles for loss. He also recorded a game-high 1.5 sacks and was disruptive in the SDSU backfield all game.

Mizzou extended its national-best forced turnover streak to 46 games with two interceptions and a fumble recovery against the Jackrabbits, and will look to keep the streak alive on Saturday.

Saturday’s game will be broadcast on ESPN and Tiger Network radio affiliates.