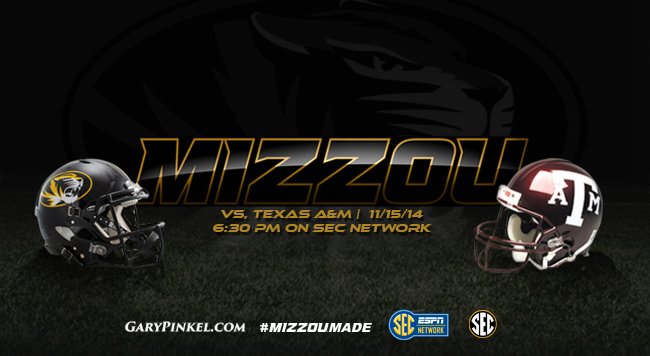 SEC Nation will broadcast live from the Texas A&M campus starting Friday, marking the second consecutive Mizzou game that the SEC Network’s pregame show has featured. The trend will continue on November 22, when Joe Tessitore, Tim Tebow, Marcus Spears, Paul Finebaum, and Kaylee Hartung travel to Knoxville, Tennessee, to break down the matchup between Mizzou and Tennessee.

Mizzou enjoyed its second and final bye of the season last week and is in first place in the SEC East after three consecutive wins over Florida, Vanderbilt, and Kentucky.

Mizzou vs. Texas A&M in History

Saturday will be Mizzou’s fourth trip to College Station in five years. The stretch started in 2010 when Mizzou claimed a 30-9 victory at Texas A&M. Due to the departure of Colorado and Nebraska from the Big 12 Conference and the resulting change in 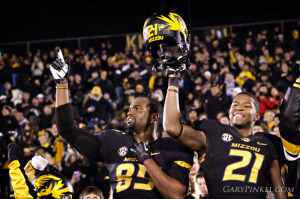 the Big 12 schedule, the Tigers played the Aggies on the road the following season, a game they won 38-31 in overtime. Both A&M and Mizzou joined the SEC in 2012, and that season’s SEC schedule put Mizzou in College Station yet again. The Aggies made the trip to Columbia last season, their first since 2007, and the Tigers emerged victorious to claim the SEC Eastern Division title.

The bizarre scheduling pattern has been a blessing in disguise for many members of the Mizzou Football Family, as 24 current Tigers call the Lone Star State home. Mizzou has made a concerted effort to recruit players from the state of Texas, shown by the fact that it is the second-most represented state on the Mizzou roster, behind only Missouri.

Overall, Mizzou and Texas A&M have played 14 times previously. Head Coach Gary Pinkel owns a 6-2 record against the Aggies, including a 3-2 mark at Kyle Field.

Mizzou’s defense has emerged as one of the stingiest in the SEC of late, as the Tigers rank 2nd in the SEC in total defense (299.6 ypg) and 3rd in scoring defense (18.2 ppg) in conference games. Mizzou hasn’t allowed an SEC foe to gain more than 380 yards in a game through its five league contests.

The defense is coming off a stellar outing against Kentucky, as the Wildcats gained just 258 yards of offense in Mizzou’s 20-10 win two weeks ago. That marked the third straight game the Tigers had held an opposing offense to below 300 yards (Florida 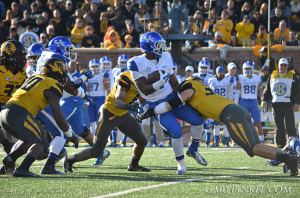 had 283, followed by 240 by Vanderbilt). In all, Mizzou has held three opponents to their season-low total offensive output so far.

Mizzou is the only defense in the SEC with two tacklers ranking in the conference’s Top 6 in total stops. Sophomore linebacker Michael Scherer leads the Tiger defense with 83 tackles on the season, but in steady pursuit is junior linebacker Kentrell Brothers, who has recorded 74 stops of his own.

Both Scherer and Brothers recorded 13 tackles in Mizzou’s last outing vs. Kentucky, setting a new career-high for Brothers and matching Scherer’s career-high. In his first season as a full-time starter, Scherer has averaged more than nine tackles per game, making him one of only three players to meet that average in the SEC. Brothers has continued to improve since stepping into a starting role last season. With 74 tackles through nine games this year, he has already surpassed last season’s total of 70, which ranked fourth on the team.

On special teams, Christian Brinser has been outstanding. The senior punter has done an outstanding job of neutralizing opposing teams’ punt return units this season, allowing just 16 returns on 53 total punts. Brinser was named a candidate for the Ray Guy Award on October 31 in recognition of his outstanding performance. He has seven punts of over 50 yards this season and has only surrendered one touchback all year.

On the offensive side of the ball, Maty Mauk has been dynamic. The sophomore quarterback threw for 154 yards and two touchdowns against Kentucky while adding a season-best 75 yards on the ground. Mauk has averaged over five yards per carry in each of the last 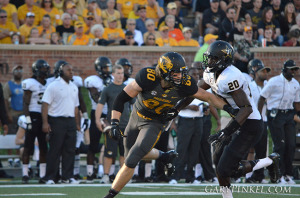 three contests, and he ranks fourth in the SEC with 18 touchdown passes on the season.

Sean Culkin is coming off a career game against the Wildcats in which he matched a career-high with four receptions. The sophomore tight end continues to come into his own, as he has now caught 12 balls for 119 yards and a touchdown on the year. He has had some huge moments thus far in 2014, including a crucial 4th down grab at South Carolina on September 27 to extend Mizzou’s game-winning drive.

Kickoff for the Mizzou-Texas A&M game is set for 6:30 p.m. CT and can be seen on the SEC Network. Mizzou Football will post live updates on Twitter, Instagram, and Facebook throughout the game, and fans can also listen in via Tiger Network radio affiliates.