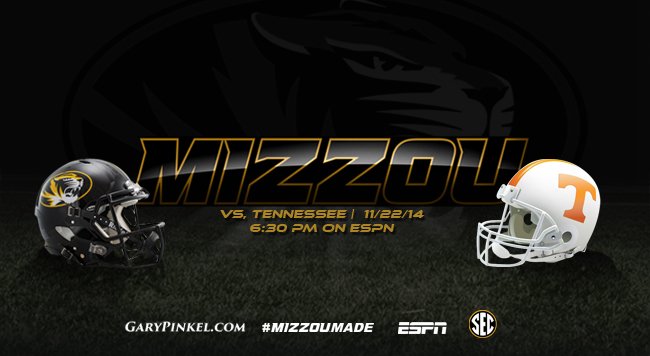 Mizzou Football (8-2 overall, 5-1 SEC) makes its final road trip of the season this week to Knoxville, to take on Tennessee.

SEC Nation will broadcast live from the campus of the University of Tennessee on November 22, marking the third consecutive Mizzou game that the SEC Network’s pregame show has featured. The previous two, Mizzou’s Homecoming game vs. Kentucky and last week’s road showdown at Texas A&M, both resulted in Tiger victories.

Mizzou vs. Tennessee In History

Mizzou and Tennessee had never met prior to 2012, the Tigers’ inaugural season in the SEC. Mizzou outlasted Tennessee 51-48 in four overtimes that season, followed by a 31-3 victory in Columbia last year. 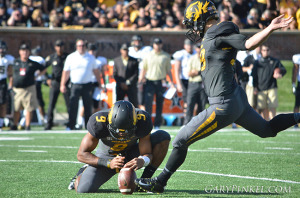 Mizzou’s four-overtime marathon vs. Tennessee in 2012 is tied for the fifth longest game in SEC history. Andrew Baggett, a redshirt freshman at the time, drilled a 35-yard game-winning field goal in the fourth overtime after Mizzou’s defense forced a four-and-out to begin the period. James Franklin sent the game into overtime with a clutch 25-yard touchdown pass with just 47 seconds left in regulation on a fourth-and-12 play. Both teams scored TDs in the first three OT periods, with neither team able to convert the mandatory two-point try in the third overtime, setting up Baggett’s heroics, which was his first game-winning field goal at any level of football.

Mizzou Football On the Road

When Mizzou returns home on Saturday evening following the game, the team will have traveled a total of 7,578 miles this season. Mizzou has won nine consecutive away games heading into Saturday’s contest at Tennessee. The Tigers were perfect on the road in 2013, are 4-0 in away games this season, and haven’t lost away from The ZOU since 2012. The nine-game road win streak stands as the third-longest active streak in the nation.

Russell Hansbrough had a monster game last week in his return to his home state. The Arlington, Texas, native rushed for a career-high 199 yards and two touchdowns en route to being named the SEC Offensive Player of the Week. Hansbrough’s 199-yard outing marked the most rushing yards by a Tiger running back in a conference game since October 10, 1998, when All-American Devin West ran for 252 yards at Iowa State. The junior tailback leads Mizzou with 790 rushing yards and nine touchdowns on the year, while averaging 5.6 yards per attempt. 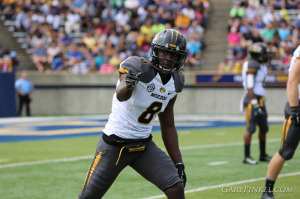 Another Texas native, Darius White, had himself a nice homecoming as well. He hauled in a career-high six catches, including a 21-yard one-handed grab on third-and-five to keep Mizzou’s go-ahead touchdown drive alive. White’s previous career-best came against Toledo on September 6 when he caught five balls, and he set career highs in yards and touchdowns the week prior with two touchdown grabs for 83 yards on August 30 against South Dakota State.

Markus Golden also had an enormous impact on the road in College Station. The senior defensive end was all over the field, recording two sacks and forcing a fumble to go along with nine total tackles. Golden now has 6.5 sacks on the season, the second-highest total on the team. As a unit, Mizzou leads the SEC in quarterback takedowns and ranks sixth nationally with a per-game sack average of 3.4. 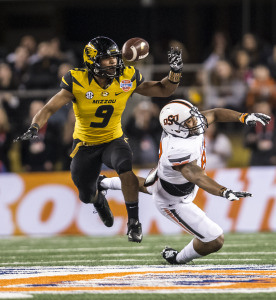 Behind Golden, Braylon Webb will be making his 40th career start on Saturday, the most of any safety in the SEC. Webb was part of the three-man crew that tallied the game-winning tackle at Texas A&M, stopping a fourth-and-one from the Mizzou 2-yard line to preserve a seven-point lead. On the season, the senior captain ranks third in the SEC in both interceptions and interception yards, as he has returned his four picks for a total of 89 yards.

As a whole, the Mizzou defense has emerged as one of the stingiest in the SEC, as the Tigers rank second in the SEC in total defense (306.5 yards per game) and third in scoring defense (19.7 points per game) in conference games. Mizzou hasn’t allowed an SEC foe to gain more than 380 yards in a game through its six league contests.

Last week, Mizzou limited high-flying Texas A&M, a team that was averaging 470 yards per game on the season, to just 341 total yards. In all, Mizzou has held three opponents to their season-low total offensive output in 2014.

Kickoff for the Mizzou-Tennessee game is set for 6:30 p.m. CT and can be seen on ESPN. Mizzou Football will post live updates on Twitter, Instagram, and Facebook throughout the game, and fans can also listen in via Tiger Network radio affiliates.