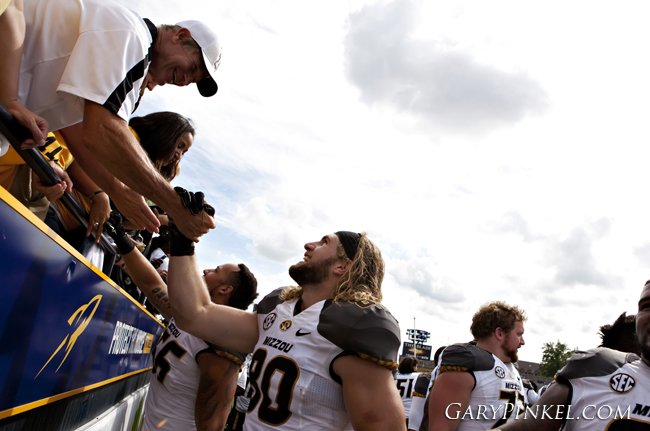 Mizzou Football (2-0) returns to The ZOU this weekend to take on the Knights of Central Florida. Mizzou is coming off a dominant 49-24 road victory at Toledo.

UCF had its best season in school history in 2013. Led by now-Jacksonville Jaguars quarterback Blake Bortles, the Knights posted a 12-1 record en route to the American Athletic Conference title and a Tostitos Fiesta Bowl victory. Central Florida lost seven starters from last year’s squad but is still picked to finish second in the AAC this season, behind Louisville.

Saturday will be just the second-ever meeting between Mizzou and UCF. The two schools played for the first time in 2012, when Mizzou held on for a 21-16 road win in Orlando, Fla. The Knights held a 10-7 halftime lead in that contest, but Marcus Murphy broke a 66-yard punt return touchdown in the third quarter to put the Tigers out in front.

Mizzou extended the lead to 21-10 on a fourth-quarter touchdown run by tailback Kendial Lawrence, and UCF responded, making it a one-possession game with a touchdown at the 4:34 mark. The Mizzou defense denied the Knights on the ensuing two-point conversion attempt, and then forced a turnover near midfield in the final minute to seal the victory.

Four Tigers to watch on Saturday are Maty Mauk, Jimmie Hunt, Bud Sasser, and Shane Ray. All four had career games against Toledo, and they will look to continue their dominance against UCF.

Mauk became just the third player in Mizzou history to record a six-touchdown game last week, as he threw for five scores and ran in another at the Glass Bowl. The sophomore finished 21-32 for 325 yards while adding 36 yards on the ground and was named SEC Offensive Player of the Week.

Two of Mauk’s touchdowns went to Hunt, who scored from 13 and 25 yards out. The two-TD game was the first of Hunt’s career, and he matched his career-high in receptions with six grabs for 71 yards.

Sasser also set a couple of career-bests against Toledo. 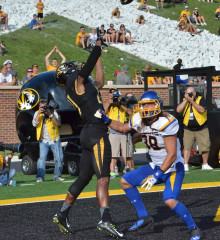 The 6-foot-2 senior hauled in five catches for a game and career-high 121 yards on Saturday. Sasser was particularly impactful on Mizzou’s second-to-last drive of the third quarter. The Rockets had scored on two consecutive drives to narrow the Mizzou lead to 35-21, and were threatening to inch even closer when they forced Mizzou into a third-and-seven from their own 28-yard line. Sasser broke free for a 47-yard gain on third down, and then scored on screen from 25-yards away on the very next play to give Mizzou momentum and a 21-point lead.

Ray wreaked havoc in the Toledo backfield from the opening kick and was a big reason why the Rocket quarterbacks completed just over half of their passes on the day. The speedy rush end had a career-high two sacks, and made Toledo’s quarterbacks feel uncomfortable all game.

Ray also played a big part in Mizzou’s lone interception, which, along with a fumble recovery by Hunt, extended the Tiger’s FBS-leading streak of games with a takeaway to 46. Kickoff for Saturday’s game is set for 11:00 a.m. CT, and the matchup will air on the SEC Network.