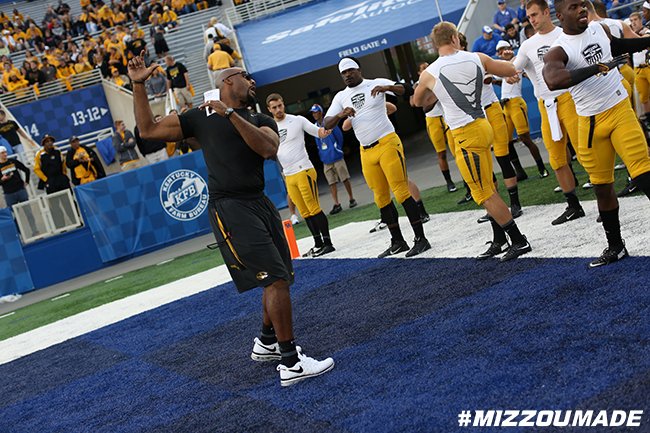 It’s Homecoming 2015 at the University of Missouri. In Faurot Field’s south end zone, smoke emanates from the tunnel’s maw as the stadium sound system rumbles the rafters. An undulating wall of rowdy Tigers, eager to run onto the gridiron, strains against the outstretched arms of Pat Ivey. The man who has helped so many student-athletes reach new heights in the weight room is now physically holding them back.

Suddenly, as if the 6-foot-5-inch mountain of a man can no longer contain his progeny’s energy, the wave of black and gold overwhelms him and Mizzou storms the field.

Ivey, BS ’96, M Ed ’00, PhD ’13, knows precisely when to provide resistance and when to relent. It’s an integral part of his job as MU’s associate athletic director for athletic performance.

“Today more than ever, student-athletes don’t care how much you know until they know how much you care,” says Ivey, a student of Rick McGuire, MU professor emeritus of psychology and founder of the Missouri Institute for Positive Coaching. “We have to see them as people first. A lot of the athletes who have the most pressure on them are the least prepared for it.”

Ivey can relate to pressure, having played football at Mizzou during some especially lean years. Detroit born and raised, the former defensive end chose MU along with his close friend A.J. Ofodile, BGS ’01, the current head football coach at Rock Bridge High School. Coached by Bob Stull and then the late Larry Smith, the Tigers were 12–31-2 during Ivey’s years competing at Mizzou.