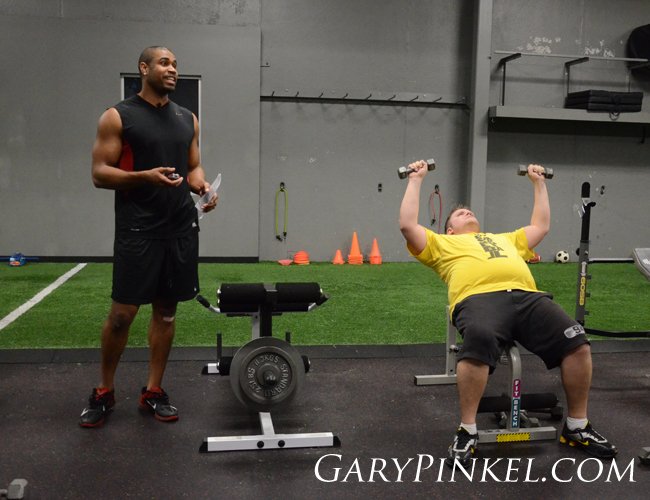 Rucker says the idea started with the suggestion of someone else he was training with.

“I was training with a guy and he had the idea of ‘why don’t you come train a couple people here and see if you like this field,” he said. “When you actually retire and hang it up, then maybe it’s something you’ll want to get into.”

Rucker designed the camp with exercises that he is familiar with and is confident work.

Rucker’s clients are seeing the results of the hard work he puts in to create such a program. John Paul Stafford, who has become friends with Rucker, has lost 15 pounds since starting with the program.

Rucker says he very much enjoys seeing those around him benefit as a result of his camp.

Rucker credits Mizzou Football for his success since his 2007 graduation.

“The foundation of it started at the University of Missouri,” he said. “And that’s so huge. Not just in here, but in my entire life outside of here. The foundation was built at Mizzou.”

Being that Rucker is so thankful for his time at Mizzou, it should come as no surprise that his first client has ties to the university and is yet another success story from Body by Ruc.

“Chase Daniel’s fiancé was actually my first client, never been a weight trainer before,” Rucker said. “So to see how apprehensive and nervous she was in the beginning, and now she’s killing it.”

For more information about Body by Ruc, contact Rucker at Rucker.martin82@gmail.com.