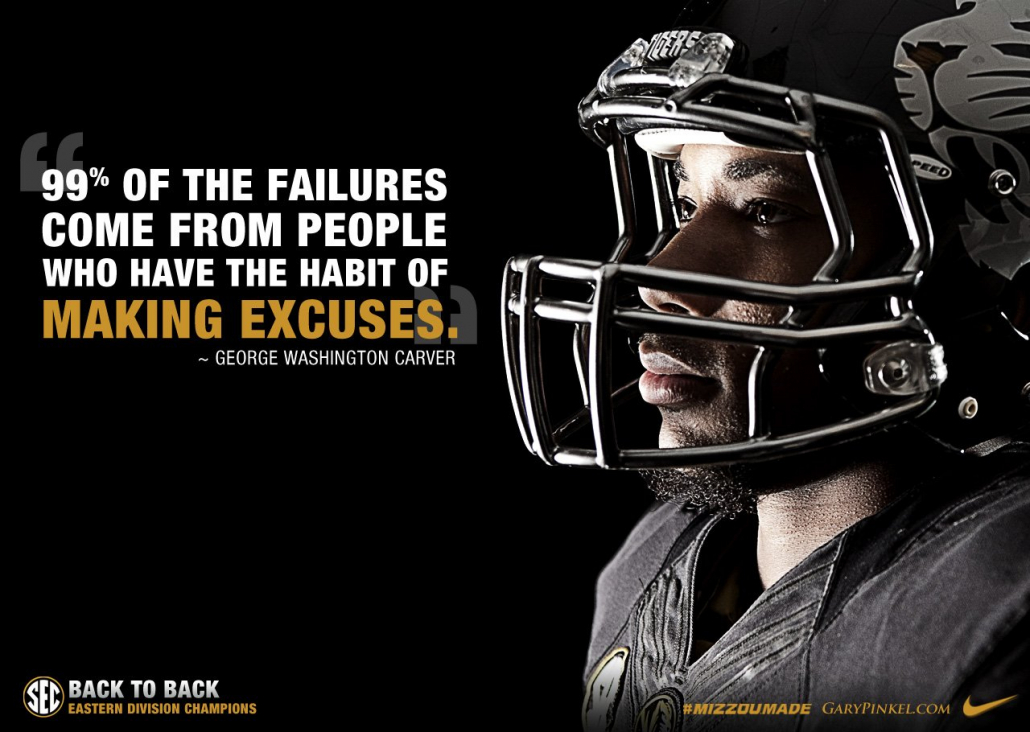 “Ninety-nine percent of the failures come from people who have the habit of making excuses.” – George Washington Carver

Let’s face it: It’s tempting to use excuses. They’re attractive in times of challenge and discomfort. However, no one is remembered in history for what they would have accomplished. History never asks how hard it was to do the job, nor does it consider the obstacles that had to be overcome. It never measures the handicaps.

Everyone wants to be remembered and recognized. Students attend universities every year in hopes of being successful and making a difference. Student-athletes find motivation in possible professional careers. Thousands of people compete in the entertainment business with the possibility of making it. So many people have big dreams, but who are the people who actually achieve them? The ones who do not give excuses.

Any excuse for non-performance, however valid, softens character. It is a sedative against one’s own conscience. For example, after you skip class once, you may think it is excusable to skip again. After a while, those excuses are easy to make, and your attendance increasingly declines. So, why are excuses used so often?

When a man uses an excuse, he attempts to convince himself and others that unsatisfactory performance is somehow acceptable. He is — perhaps unconsciously — attempting to divert attention from performance; the only thing that counts is his own desire for sympathy. Excuses aren’t respected by others, though. A person who makes excuses is not seen as trustworthy or competitive, but merely trying to skate by without putting in the effort.

A person who falls back on excuses is dishonest with himself as well as with others. No matter how good or how valid, excuses never change performance.

The world will reject excuses time and time again, but what they will accept is performance. No man ever performed a worthwhile task without consciously ignoring many plausible excuses. When you fight the temptation to give excuses, you are strengthening your character without realizing it. You also gain the respect and trust of your peers and leaders. They will consider you for leadership roles and for promotions, because they are confident that you will not give into challenge or hardship.

Using excuses is a habit. You cannot have both the performance habit and the excuse habit. The more excuses you use, the lower your standards become and, in turn, your performance suffers.

Whenever you are tempted to give an excuse, remember this simple mantra: no excuses! Those two words will be surprisingly motivating as you remember the consequences of giving an excuse.

The benefits of high performance are worth more than the excuses you pass up along the way. Along with respect from your peers, you will have high self-respect. You will give your all and never have to feel the burden of running away from life’s challenges. You do not need to be perfect, but you do need to work your hardest.

Mizzou Made in the NFL: Week 13
Scroll to top