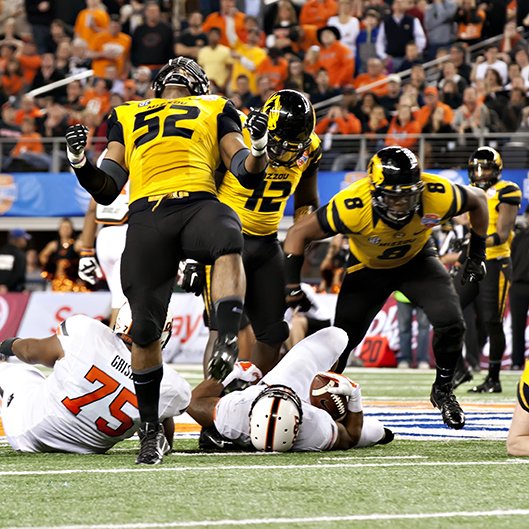 Proven playmaker at the defensive end spot who excels at getting in the opposing backfield and causing havoc … His 17.0 career tackles for loss and 9.5 career sacks are the most among any returning Tiger, and he’s got 38 games of experience under his belt, including 10 career starts (with nine starts coming in 2012) … Has shown a knack for being around the ball, as his four forced fumbles, two interceptions and one recovered fumble would attest … Opens camp atop the depth chart at the end position where he started nine times a year ago.

Started nine times in 12 appearances and was fourth on the team with 7.0 tackles for loss and 3.5 quarterback sacks, while his four quarterback pressures ranked as third-most on the team … Recorded his first career defensive touchdown on his first career fumble recovery, scooping and scoring from seven yards out against SELA … Recorded five tackles, highlighted by 1.5 sacks against ASU … Potentially changed the UCF game at the end of the first half with a huge sack … The Knights had the ball on the MU 2-yard line, but Sam’s sack ran the clock out, as UCF was out of timeouts and could not get the field goal unit on the field in time … Posted five tackles, including 1.5 sacks against Alabama and forced a pair of fumbles, closing out a monster game … Had two solo tackles and a quarterback hit in the Tigers’ 33-10 win over Kentucky … Posted one solo tackle, a sack of Tennessee’s Tyler Bray for seven yards, in the Tigers’ 51-48, four overtime win at Tennessee.

Continued his development into a key contributor, and ended with 29 tackles on the year, including 3.0 TFLs and 1.5 sacks … Made one of the biggest defensive plays on the season when he intercepted a ball against Texas Tech inside the MU 5-yardline in the closing seconds of the game to preserve a win which made Mizzou bowl eligible … Registered one tackle and a hurry in the season opener with Miami (Ohio) … got his first career start against Western Illinois, where he recorded three tackles … had an assisted tackle for loss against the Oklahoma Sooners in week four … had three tackles, including 1.5 sacks for a loss of five yards, and a quarterback hurry against Iowa State … had four tackles against Oklahoma State … posted five tackles against Kansas, three solo and two assisted…

Spent his first season as a Tiger working hard in practice and the weightroom while gaining a redshirt.