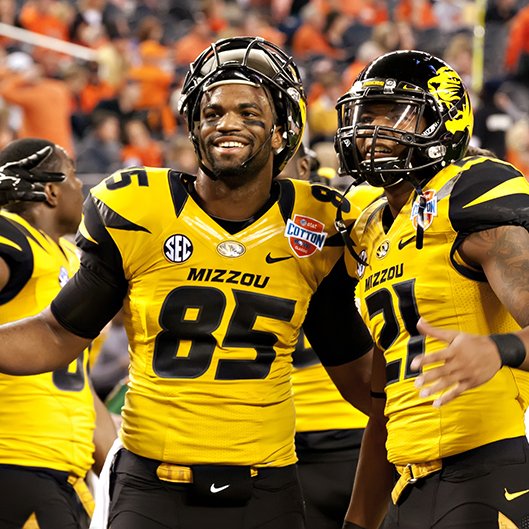 Is the Tigers’ most experienced returning receiver who will be looked to for big production in his senior season after the passing game took a dip in consistency a year ago … Enters the year with 35 career games and nine career starts, and needs 28 receptions and just 54 yards to reach 100 catches and 1,000 yards for his career … Opens camp listed at No. 1 on the depth chart at the X-receiver position.

Led Mizzou in receptions (46) and receiving yards (509), while hauling in three TD passes as a junior … Started the first six games of the year, and came off the bench for the final half … Caught at least two passes in 11-of-12 games on the year, and had five games in all of 50 yards or more … Tied for the team lead with three receptions against Southeastern Louisiana, totaling 30 yards with a long of 21 … Led all MU wide receivers against Georgia, hauling in six passes for 88 yards and a touchdown … His TD was the first score of the game, a 41-yard catch-and-run in the second quarter … It was his sixth career TD, while the 88 yards receiving were a new career high … Caught four passes for 35 yards against Arizona State with a long of 13 … Led all Missouri receivers against South Carolina, bringing in nine receptions for 78 yards and a touchdown … The touchdown came from Corbin Berkstresser from 1-yard out late in the fourth quarter … Caught five passes against UCF to lead all Tigers and finished the game with 33 yards … Had four catches for 54 yards with a long of 18 against Vanderbilt … Had two catches for 18 yards in the Tigers’ loss to Alabama … Played against UK but did not tally a catch … Posted three catches for 20 yards in the Tigers’ 14-7 loss at Florida … Led Mizzou with five catches, totaling 51 yards and a touchdown in the Tigers’ 51-48, four overtime win at Tennessee, including an 18-yard TD catch from James Franklin in the second overtime, tying the game and sending it to the third OT.

Had a career season, with 23 receptions (4th on the team) and 414 yards (3rd on the team), while his 5 touchdowns was tied for the team lead, despite not being a starter for much of the season … Got his season started by making his first career start against Miami (Ohio), and made a 10-yard touchdown grab in the fourth quarter to salt the game away … the touchdown catch was the first of his career … led the Tigers in receiving against Arizona State, totaling 87 yards on four catches … helped set up Mizzou’s game-tying score late in the fourth quarter, covering 49 yards on a catch-and-run down to the ASU twio … led the Tigers with five catches for 64 yards against Texas A&M … caught the game-winning score on an 11-yard pass from Franklin in overtime, leaping above his defender to haul in a perfectly-placed fade pass … caught four passes for 80 yards and a touchdown against Baylor … the score came from 24 yards out with 7:05 left in the fourth quarter … led all Missouri receivers with four catches for 68 yards and a score against Texas Tech … his touchdown came early in the fourth quarter, as he made a diving catch in the end zone to cut the Red Raider lead to 27-24 … his one reception against Kansas put the Tigers up by two scores, as he streaked down the sideline and hauled in a 53-yard catch on the first play of the fourth quarter…

Saw the field as a true freshman, getting snaps in 10 games on the year, and catching 3 passes for 23 yards in all … First catch was a six-yard grab against McNeese State … Added an 11-yard reception in the win over then-No. 1 Oklahoma … Had one catch, for six yards, against Texas Tech.

One of the top playmakers in the Midwest who … Ranked by Rivals.com as the No. 2 overall prospect in the state of Missouri, and as the No. 25 wide receiver in the nation … Tom Lemming had him as the nation’s No. 9 wide receiver prospect, while putting him as the No. 93 player in the country at any position … Scout.com ranked him as the nation’s No. 15 wide receiver, while ESPN rated puts him at No. 38 at the position nationally … Was selected to play in the prestigious U.S. Army All-American Game in January, along with fellow 2010 Mizzou signee Nick Demien … A two-time First-Team All-State wide receiver who was awarded each of his last two years with the Otis Taylor Award for the best receiver in the Kansas City metro area … Played as a marked man during his senior season, but still managed to catch 38 passes as a for 819 yards and nine touchdowns, and as a junior, tallied 58 receptions for 1,176 yards and 18 scores … Caught 32 passes for 572 yards and 9 TDs during his sophomore season … In addition to his football exploits, was also a standout in basketball and track and field for Liberty High … High school coach – Joel Wells.

Mother – Monique Lucas, who lettered for Mizzou’s women’s basketball team from 1986-89 … Interested in studying either business or sports medicine at Mizzou … Lists hobbies as sports and being around family and friends … Chose Mizzou over Oklahoma, Nebraska, Iowa, UCLA, Kansas, Tennessee, Stanford and Arkansas, among many others, and says that it was the strong family atmosphere in the Mizzou program which was a major appeal.