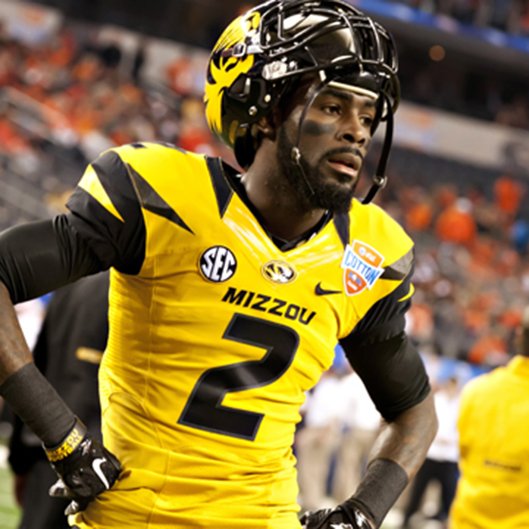 Explosive wideout with big-play ability who will look to bring that longball threat to the Tiger offense for one last season … Opens camp lined up at the Z-receiver position, where he is listed at No. 1 on the depth chart … Started all 12 games a year ago, with six starts coming at the Z-receiver spot, and the final six coming at the X-receiver position … Enters the season with 50 career catches for 842 yards and 5 touchdowns, and needs just 158 more yards to reach the 1,000-yard mark.

Started all 12 games and contributed with 25 receptions for 443 yards and two touchdowns … His yardage total was second-most on the team, as was his per-catch average of 17.7 yards … Showed big-play ability by getting free for touchdowns of 74 yards at Texas A&M and 69 yards against Georgia … Earned his first career start against SELA to open the season … Caught two passes against Georgia, highlighted by a 69-yard strike from James Franklin … At the time, the completion was the longest for the Tigers since 2009 .. Caught three passes for 34 yards in the Arizona State game … Hauled in two passes for 19 yards against Central Florida … Earned a start against Vanderbilt but did not catch a pass … Led the Tigers with four catches for 72 yards, including a long of 29 yards against Alabama … Had one catch for seven yards in the Tigers’ 33-10 homecoming win over Kentucky … Posted two catches for 23 yards, including a long of 14 yards in the Tigers’ 14-7 loss at Florida … Made a season-high five receptions against Syracuse for 76 yards.

Was a steady producer throughout the year and ended with 20 catches for 364 yards and 3 TDs … Played in his hometown of Shreveport, La. in the Independence Bowl, and delighted his family and friends by making 3 receptions for 47 yards … Brought in three passes for 39 yards in Mizzou’s loss to Arizona State … one of those three receptions was a 25-yard touchdown for the first score of his collegiate career … hauled in three receptions for 61 yards against Western Illinois, including a long of 30 yards … caught just one pass against Oklahoma, but it was a big one, bringing in a 45-yard touchdown that put Mizzou up 14-3 in the first quarter … caught two passes for 70 yards against Iowa State, including a long of 41 yards on a 3rd-and-4 late in the first half which set up a Tiger field goal … had one catch against Texas Tech but he netted 36 yards on the play, helping set up a field goal at the end of the first half…

Saw action in 12 games, and made five receptions for a total of 35 yards … First career catch came against Illinois … Finished with two receptions in the win over the Illini … Had a career day with four catches against McNeese State, for 24 yards.

Was able to preserve a redshirt to further develop physically with MU’s renowned strength and conditioning program.

Rated by Rivals.com as the No. 51 overall prospect (any position) out of the state of Louisiana … Emerged late in his high school career on the recruiting scene … Won First-Team All-District honors as a senior in 2008 after he caught 53 passes for 1,064 yards and 12 touchdowns on offense, while grabbing four interceptions on defense as a team captain … Had one massive game where he caught six passes for 257 yards and three touchdowns, which earned him statewide player of the week honors … Was named the offensive MVP at the inaugural Sportsman’s Paradise All-Star Game in Louisiana played in January … Took home All-District honors as a defensive back in 2007 as he grabbed seven interceptions during his junior season … High school coach – Stephen Dennis.

Has excelled despite having lost both of his parents … Is one of four boys in the family (he’s the second youngest) who live together taking care of each other … Is majoring in psychology … Lists hobbies as basketball, talking about football with his family and friends, and playing catch with his younger brother … Chose Mizzou over Nebraska, Minnesota, Louisiana Tech and Tulsa, among others … Says that the feel he developed with the Tiger coaches was a main draw, as well as the chance to play in Mizzou’s prolific spread offensive attack.