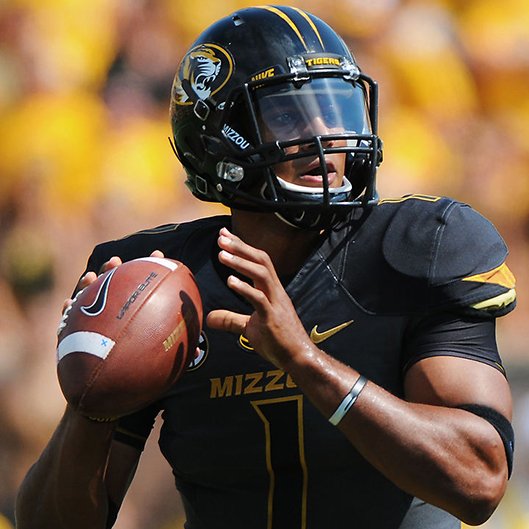 Had a challenging season, as injuries both to him, as well as all over the offensive line, played a major factor in a drop in production by the Tiger offense … Ended the year with nine appearances, and made eight starts as injuries kept him out of three games altogether … Also was knocked out of two games in which he started – games against Vanderbilt and Syracuse in which he was performing at a very high level before having to leave … Ended the year with 1,562 passing yards and 10 TDs, while his health limited him to just 122 yards rushing and no TDs – a year after he ran for 981 yards and 15 TDs as a sophomore … His last outing of the season was symbolic of the tough year he dealt with, as he had Mizzou in position to defeat Syracuse and attain bowl eligibility, before sustaining a concussion in the fourth quarter which kept him out of the rest of the game and in the season finale at Texas A&M … Prior to the concussion, he was a stellar 17-of-23 passing against Syracuse for 279 yards and 2 TDs with no interceptions … Was solid in the season opener against Southeastern Louisiana, finishing the contest with 13 completions on 21 attempts for 131 yards and a touchdown … Also picked up 39 yards rushing on six carries … Went 25-for-41 with 269 yards, two touchdowns and an interception through the air against Georgia … Carried the ball 20 times in the game, with his longest rush coming for 14 yards … Early in the third quarter, hit L’Damian Washington for a 69-yard touchdown pass, the longest completion of Franklin’s career until an 80-yard score to Dorial Green-Beckham at Central Florida … Injured his throwing shoulder late in the Georgia game, and was forced to miss the Arizona State game the next week … Returned to complete 11 passes against South Carolina for 92 yards … Bounced back the next week and went 19-for-30 against UCF with 257 yards and a TD in helping guide the Tigers to a solid road win … The touchdown strike was an 80-yarder to freshman WR Dorial Green-Beckham, giving Mizzou a 7-3 lead early in the second quarter … Was 5-of-9 for 56 yards and had one rush for 23 yards and guided Mizzou to a pair of field goals on its opening two drives against Vanderbilt before missing the rest of the game with a left knee injury … Did not play due to a knee injury against Alabama … Came off the bench and went 6-of-9 passing for 16 yards in the Tigers’ 33-10 win over Kentucky after being listed as doubtful prior to the game due to the knee injury … Started at Florida and went 24-of-51 for 236 yards but had four interceptions in the loss … Also ran the ball 11 times for 64 yards … Matched a career-high with four touchdowns while going 19-of-32 for 226 yards with just one interception in the Tigers’ 51-48, four overtime win at Tennessee … Named one of the SEC’s Outstanding Performers of the week for that effort … Ran for 52 yards as well … All four of his touchdown passes came in the fourth quarter or overtime in the win, including a 25-yard strike on 4th-and-12 to Dorial Green-Beckham to tie the game with just 47 seconds remaining … He also had three touchdowns in overtime … The injury bug actually started for him in the spring, when he tore labrum in his throwing shoulder when he was landed on by a defender in a scrum for a loose ball … Missed the remainder of the spring and had surgery to repair the damage, but was cleared to play once fall camp arrived in August.

Won the starting job after a strong spring camp, and in his first year as a starter, just narrowly missed out on a rare 3,000-yard passing/1,000-yard rushing season … Ended the year with 2,865 yards in the air (21 TDs) while running for 981 yards and a team-best 15 TDs … His 36 TDs accounted for was the 3rd-most in MU single-season history … Finished the year strong, in helping lead MU to a 4-game winning streak, and he closed by leading Mizzou to a big 41-24 win over North Carolina in the Independence Bowl, where he threw for 132 yards and 1 TD, while he ran for 142 yards and 2 more scores … Made his highly-anticipated first career start in the Tigers’ season opener against Miami (Ohio) … finished the game 17-for-26 through the air with 129 yards, one touchdown and one interception … ran for 72 yards and one score on 14 carries … at Arizona State, went 26-of-42 passing for 319 yards and two touchdowns with no turnovers … also ran for 84 yards and one touchdown to give him 403 yards of total offense … led a furious fourth quarter comeback, as the Tigers trailed 30-16 entering the final period before sending it to overtime, throwing for 104 yards and two TDs in the quarter … threw for 246 yards with three touchdowns and no interceptions against Western Illinois on 18-of-25 passing in just over two quarters of play … accounted for 394 yards of total offense against Oklahoma, completing 16-of-33 passes for 291 yards and one touchdown with zero interceptions … also ran for 103 yards with two touchdowns … went 19-for 35 for 214 yards and an interception against Kansas State … also carried the ball 11 times for 46 yards, which included a one-yard score in the fourth quarter to pull the Tigers within a touchdown … his interception on the first play of the game broke a streak of 108 consecutive pass attempts without an interception … completed 20 of 28 passes against Iowa State for 289 yards with three touchdowns and two interceptions … ran the ball 11 times for 84 yards and scored twice on the ground while averaging 7.6 yards per carry … completed 14 passes for 184 yards and a score against Oklahoma State … ran the ball 15 times for 55 yards and scored a rushing touchdown against the Cowboys … accounted for four touchdowns in Mizzou’s upset over Texas A&M, connecting on two through the air and two on the ground … completed 16 passes for 198 yards against the Aggies while rushing for 97 yards on 24 carries … scored the first touchdown of the game on a 20 yard scramble where he broke three tackles and spun off a defender on his way to the end zone … closed out the first quarter with a 42-yard strike to Eric Waters for a TD … pulled the Tigers within four on a diving eight-yard score early in the fourth … hit Marcus Lucas on a perfectly-thrown fade route in overtime to give the Tigers the win … passed for 325 yards and three touchdowns while completing 33-of-46 passes in the loss to Baylor … picked up 57 yards on the ground on 16 carries … all three touchdown passes came in the final seven minutes of the game to pull back within three … was 18-for-26 with 186 passing yards against Texas, while picking up 33 yards and a score on the ground … went 13-for-20 with 172 yards and two touchdowns in the win over Texas Tech … also had a huge game running, netting 152 yards on 20 carries while scoring twice … had a season-long 31-yard run in the first quarter … finished the Kansas game with 180 yards passing and two touchdowns on 21 attempts, overcoming a rough first half that saw him throw three interceptions … added 45 yards rushing on the ground … his touchdowns were of 25 yards to Wes Kemp and 53 yards to Marcus Lucas…

Served as the understudy to Gabbert, and saw action in 10 games as he was given snaps in key spots of most games … Was asked to use his size and strength in the run game most often, and he carried 23 times for 116 yards and 2 TDs, and he also completed 11-of-14 passes for 1 score … Completed six-of-eight passes in his first game for 25 yards against McNeese State … Carried the ball four times for 28 yards and scored a TD on an eight-yard run in the third quarter … Was 3-of-4 passing for 35 yards against Colorado … Picked up his first career TD pass on a seven-yard toss to Michael Egnew in the 4th quarter … Scored his second TD of the year on a three-yard run in the 4th quarter to help seal the Tigers’ victory over Oklahoma … Had two runs for a total of 17 yards, including a 17-yard rush on MU’s first series … Carried the ball five times for 19 yards against Iowa State, including a 10-yard run on a 3rd-and-1 play.

Ranked as the nation’s No. 4 dual threat quarterback by Rivals.com, who also put him among the nation’s top 150 players at any position, as well as rating as the No. 20 overall prospect to come out of the state of Texas in 2010 … Ranked by Tom Lemming as the nation’s No. 5 combo passer … In 2009, threw for 2,360 yards, rushed for 1,282 yards and accounted for 41 total TDs, as he was a Class 4A Second-Team All-State selection, while also winning District 5-4A MVP honors … As a junior, passed for 2,464 yards and added 23 TDs, while gaining 1,151 yards and 18 more TDs on the ground … High school coach – Jeremy Males.

Parents – Willie & Pamela Franklin … Father was a standout tight end for Oklahoma and played in the NFL with the Baltimore Colts … Studying communication while at Mizzou …Chose Mizzou over Nebraska, Oregon, Oklahoma State, TCU and Kansas State, among others.