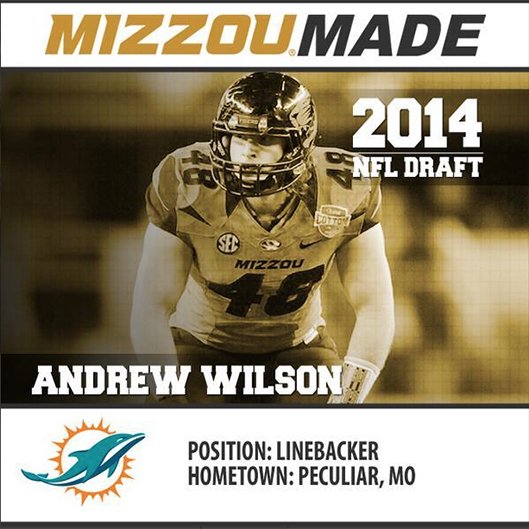 One of the top returning linebackers in the country who will look to close out an outstanding career on a high note … A big-time hitter who has led MU in tackles each of the last two seasons … Will patrol the middle of the field primarily, and he opens his final spring camp as a Tiger listed atop the depth chart at that position … His 219 career tackles entering the 2013 season is 50 more than the next-closest teammate (E.J. Gaines with 169).

Led Mizzou in tackles for the second straight year, ending with a team-best 79 stops in all … Ranked among the NCAA leaders for most of the season in forced fumbles, and ended with four on the season, while he also recovered a fumble … Had a clutch performance in Mizzou’s epic four-overtime win at Tennessee, as he posted eight tackles (five solo, three assists) with a tackle for loss, a fumble recovery, a pass break up and a quarterback hit … His pass break up at UT was a game-saver, as it came in the third overtime to break up Tennessee’s attempted two-point conversion pass which, if successful, would have resulted in a Volunteer win … His breakup over the middle sent the game to a fourth extra period, where MU eventually prevailed in the end by a 51-48 score … Ended the season with a season-best 10 tackles at Texas A&M … Tied for the team lead in tackles in the season opener against SELA, recording six on the evening … Against Georgia, finished with three tackles, forced a fumble, broke up a pass and added a QB hurry … Forced another fumble and led the team with nine tackles against Arizona State … Assisted on a sack and had four tackles against South Carolina … Also forced a fumble in the contest, his fourth of the year and fifth of his career … Posted six tackles in the Central Florida contest – three solo and three assisted … Posted nine tackles, the second-best total on the team, against Vanderbilt, including half a tackle for a loss … Also had a pass deflection in the second quarter … Posted eight tackles, including half a tackle for loss against Alabama … Notched five tackles (three solo, two assists) including 0.5 TFL with a pass break-up in the Tigers’ 33-10 homecoming win over Kentucky … Tallied six tackles (two solo, four assists) in the Tigers’ 14-7 loss at Florida, ranking second on the team with those six tackles in the game … Won the team’s awards for most hard hits (Hammer Award) and also the underclassman leadership award … Also took care of business in the classroom, as he was named to the SEC 2012 Academic Honor Roll for his efforts.

Had a breakout season, earning 2nd-Team All-Big 12 honors as he led Mizzou with 98 tackles on the year … Closed the season by winning Defensive MVP honors in MU’s Independence Bowl win over North Carolina, when he made 9 tackles, including 2 TFLs, and forced a fumble on the night … Had 4 double-digit tackle games, including the season opener against Miami (Ohio) with 10 tackles, four solo and six assisted … led the Tigers with eight tackles against Western Illinois, three of which were for loss … had four solo tackles, including one for loss, against Oklahoma … led all Missouri defenders with 13 tackles, nine solo, at Kansas State … once again led all Mizzou defenders with 10 tackles against Iowa State, including one for loss … finished the Oklahoma State game with eight tackles – four solo and four assisted … also had 1.5 tackles for loss, totaling five yards. … had 12 tackles against Texas A&M, tied for most on the team … posted seven tackles at Baylor … led Mizzou in tackles, finishing the Texas game with nine stops … posted four tackles against Kansas, including an assisted tackle for loss…

Had an outstanding season as a redshirt freshman, and his contributions were crucial to a unit that was hit hard by injuries all throughout the year to several veteran performers … In spite of his youth, stepped in and not only kept things afloat, but excelled and showed that he’s going to be a mainstay on the field for a long time … Ended the year with 42 tackles in 13 games, while making three starts … Recorded one tackle in his first collegiate action against Illinois … Started for the first time in his career against McNeese State … Was second on the team with seven tackles in the win over MSU … Had three tackles against San Diego State … Made six tackles and picked up a half of sack against Miami (Ohio)… Added a tackle in the win over CU and had one stop against Texas A&M … Picked up five tackles against Oklahoma … Had three tackles against Nebraska … Made seven tackles, all solo stops, against Kansas State … Picked up five tackles in the shutout of Iowa State … Recorded three stops against Kansas … Won the team’s Special Teams Player of the Year award for his play on virtually every special team’s unit … Also earned the Hammer Award, given for the most big hits on the team in 2010.

Was a December 2008 graduate of high school, and enrolled in Mizzou for the 2009 spring semester and took part in winter conditioning and spring ball … Ended up being able to preserve a redshirt season, where he worked hard as part of the scout team throughout the season, and constantly gained notice for his big hits during practice.

Was named the Missouri Class 5 defensive player of the year, after notching 146 tackles for Ray-Pec, which went 11-2 in 2008 and were runners-up in the state title game … Also won the Buck Buchanan Memorial Award for most outstanding linebacker/lineman in the Kansas City area … Ranked by Rivals.com as the state of Missouri’s No. 13 overall prospect (any position) and as the No. 69 linebacker prospect in the country … Scout.com listed him as the nation’s No. 18 outside linebacker prospect … ESPN.com had him as an inside linebacker prospect and lists him as the nation’s No. 44 prospect there … Had 129 tackles as a junior, with 17 tackles for loss, 3.5 quarterback sacks, four forced fumbles, two interceptions and one fumble recovery and earned All-State, All-Metro, All-Conference and All-District honors … Played defensive end as a sophomore in 2006 as Ray-Pec won its third straight state title, before he moved to middle linebacker for his last two years … High school coach – Tom Kruse.

Parents – Jay & Stacy Wilson … Father Jay played linebacker at Mizzou from 1980-83, winning All-Big Eight honors in 1983, and he left MU holding the school’s career tackles record, with 323 (he now ranks 12th on the list) … Interested in studying business management at Mizzou … Lists hobbies as fishing and reading … Chose Mizzou over Wisconsin, Iowa, Kansas, Kansas State, Colorado State and Northwestern, among others … Mizzou’s family atmosphere in the football program was a big selling point for him.