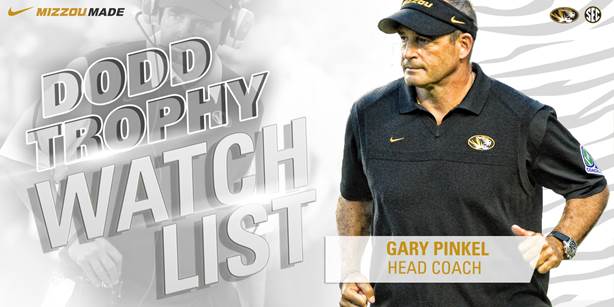 COLUMBIA, Mo. – Mizzou football head coach Gary Pinkel was one of 23 head coaches to be named to the Dodd Trophy Preseason Watch List, by the Bobby Dodd Coach of the Year Foundation and the Chick-fil-A Peach Bowl. Pinkel is one of eight SEC coaches to land on the list, which is designed to recognize the nation’s top head coach.

The list includes 23 of the nation’s top college football coaches representing all Power 5 conferences, the Mountain West Conference and Notre Dame. The head coaches on the watch list represent programs with the highest ideals of leadership, scholarship and integrity on and off the field – the three pillars of legendary coach Bobby Dodd’s philosophy. Each coach sits at the helm of programs with winning records, superior Academic Progress Rate (APR) scores and graduation rates, along with a strong commitment to service within their respective communities.

Pinkel is the reigning SEC Coach of the Year and has led Mizzou to five conference division titles in the last eight seasons (2007, 2008, 2010, 2013, 2014), which is tied for the best in the nation in that span. Mizzou has won 76 games since 2007, for the fifth-most wins nationally during that time. Pinkel is the winningest coach in Mizzou history (113-66) and is the 25th-winningest coach in FBS history.

Not only have Pinkel’s teams seen tremendous success on the field, but they have excelled in the classroom. In 2013 and 2014, Pinkel’s teams have ranked in the NCAA top 10 in APR. The Tigers were third in the SEC in APR in 2015 and led the league in 2014.

Pinkel will be among Mizzou’s contingent at SEC Media Day on Wednesday, July 15 in Hoover, Alabama. Mizzou is slated to meet the media from 1-4 p.m. For all the latest on Mizzou football, follow the team on Twitter, Facebook, and Instagram.