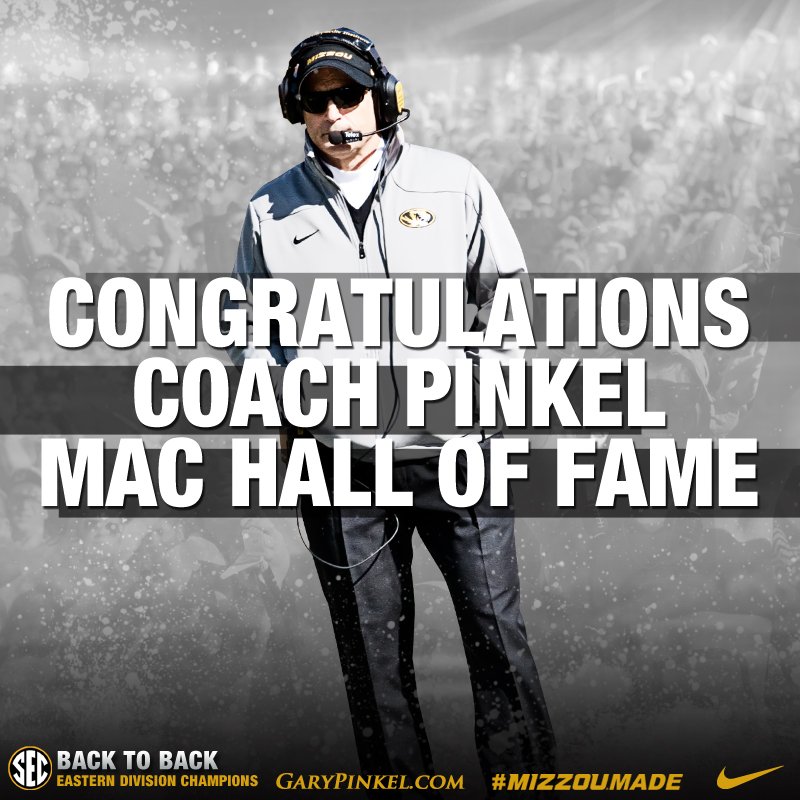 COLUMBIA, Mo. – The Mid-American Conference inducted its 2015 Hall of Fame Class on Wednesday, May 27 and Mizzou head football coach Gary Pinkel was among the five honorees in this year’s class. Pinkel was the head football coach at Toledo from 1991-2000 and is a 1975 graduate of Kent State. Pinkel is joined in this year’s MAC Hall of Fame Class by Casey Cunningham (Central Michigan, wrestling), Bob Parks (Eastern Michigan, cross country/track & field), Ben Roethlisberger (Miami, football) and George Dales (Western Michigan, cross country/track & field).

In Pinkel’s 10 seasons as the head coach at Toledo, Rockets players were named to the Academic All-MAC team or Academic Honor Roll 61 times, more than any other league school over that time period. He coached two Academic All-Americans at Toledo, Craig Dues (1995-96) and Todd France (2000).

In 10 years as the head coach of the Rockets from 1991-2000, Pinkel racked up the most wins in school history (73), as well as the highest winning percentage (.659) among those coaches who coached for at least three seasons. He also ranks fifth all-time in the MAC in wins, fourth in wins in MAC contests (53) and eighth in winning percentage.

He was MAC Coach of the Year in 1995 and 1997. Pinkel left Toledo after the 2000 season to accept the head coaching position at Mizzou, where he has led the Tigers into the top 10 in 2007 and 2008, as well as SEC East titles in 2013 and 2014. He is Missouri’s all-time leader in wins (113), making him the all-time victory leader at both schools. Pinkel was a three-time letterwinner as a tight end at Kent State from 1971-73. In his senior season he earned All-MAC and honorable mention All-America honors.

At Toledo, Pinkel established volunteer programs for his team with Big Brothers Big Sisters and Habitat For Humanity, as well as numerous elementary school outreach programs in the Toledo area. He has the unique distinction of being in the Hall of Fame at two MAC schools, Kent State and Toledo.