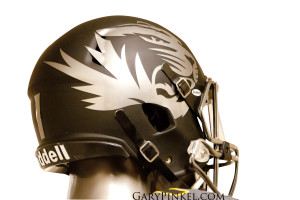 When Mizzou defeated Indiana 45-28 on Saturday night, the Tigers were decked out in new helmets.

New and trendy uniforms are vital mechanisms in the modern college football machine, and many programs place visual importance high on their lists of necessities.

With so many combinations, fans don’t know what the Tigers will look like on Saturdays, and that’s a good thing. The constant changes all around the college football world prompt a larger question: How much do uniforms matter?

There is the old refrain: “Look better, play better.” It’s definitely true to some extent. New uniforms are indicative of a program’s full initiative. By making a habit of improving its look, Mizzou is proving its dedication to style, success and a commitment to the advancement of the program.  If effort given on the field is an indication of a team’s heart, the designs and patterns it wears are windows into its soul.

Missouri football is dedicated to constantly putting an exciting, contemporary product on the field for fans. New uniform announcements generate mid-week buzz. Furthermore, brand expansion makes the words “Mizzou Tigers” more recognizable. This in turn evolves into a wider net to cast in recruiting, with prospects from far and wide unable to get the thought of those cool, new Tiger uniforms out of their heads.

“There is no question they play a role in the recruiting process,” wrote ESPN.com’s Jeremy Crabtree of uniforms in August. “They have become an integral part of the college football experience, woven into the fabric of recruiting.”

There’s also this opinion from a Rivals.com article by Adam Gorney: “Prospects are all different so uniforms can matter a great deal or not at all. Some go to school for certain majors, some go because everyone in their family has gone there, some commit early, some switch on National Signing Day. But some like—make that, really like—the flashy trends.”

This fact should bode well for the Tigers.