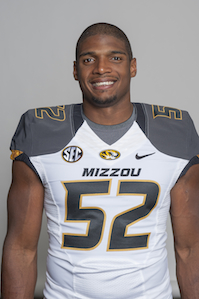 Mizzou’s Michael Sam has been stacking up the award nominations, and that will likely continue as we roll through the month of November. But Sam has been nominated for an award that’s a little off the beaten path for a defender.

Sam has been named as a “Player to Watch” for the 2013 Walter Camp Player of the Year Award. It is the fourth oldest college football award that’s given annually, and it goes to the best all-around player in college football.

Fifteen total players have been named as a Player to Watch, but Sam will join just two other defensive players nationally for the honor. All other players are on the offense with quarterbacks (10) getting the most nominations.

Voting is done by FBS coaches as well as various schools’ sports information directors. The 15-player list will be trimmed down to just five players on Dec. 2. The winner will be announced on Dec. 12 during a live edition of SportsCenter on ESPN.

Sam will next be in action on ESPN on Nov. 23 as Mizzou heads down to Oxford, Miss., to take on Ole Miss in a crucial SEC battle.