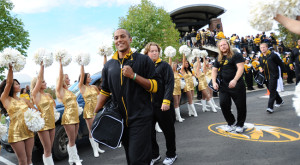 There are theories that may or may not be true. We test them to see if they are valid, and sometimes we can’t know if they are legitimate.

However, there are also laws. Laws are positively tested theories that have been declared valid. For teamwork on the football field, there are certain laws that have surpassed the test of time and validity to which we can confidently look. These results are either going to be what our overall goal is or the closest we can come to it.

The Law of the Big Picture

The first law is the Law of the Big Picture. It is short and simple, yet so powerful: The goal is more important than the role.

Winning teams have players who put the good of the team ahead of themselves. They want to play to their strengths, but they’re willing to do what it takes to take care of the team. They are willing to sacrifice their roles for the greater good.

Those who build successful teams never forget that every person on a team has a role to play, and every single role plays its part in contributing to the bigger picture. Without that perspective, the team cannot accomplish its goal.

Leaders at the highest level understand the Law of the Big Picture. They continually keep the vision of the big picture before themselves and their teammates.

It takes courage and resolve to recognize that the goal is more important than the role. It’s no small feat for people to do what’s best for the team. Often it means sacrificing personal satisfaction, individual stats or glory.

Here are a few laws within the Law of the Big Picture:

Look Up at the Big Picture

Everything starts with a vision. You need to have a goal. Without one you cannot have a real team. An individual without a goal may end up anywhere. A group of individuals without a goal can go nowhere. On the other hand, if everyone in a group embraces the vision for achieving the big picture, then they have the potential to become an effective team.

The people on a team will sacrifice and work together only if they can see what they’re working toward. If you are the leader of your team, your role is to do what only you can do. Paint the big picture for your people. Without the vision, they will not find the desire to achieve the goal.

Size Up the Situation

One value of seeing the big picture is recognizing how far you are from achieving a goal. For someone determined to do everything alone, the gap between reality and a vision is often intimidating. But for teams, seeing the size of the task ahead doesn’t worry them. They can’t wait to put together a plan to accomplish that vision.

It’s alright to aim high if you have the right support. That’s what resources are. They support to help you reach the goal. It doesn’t matter what kind of team you’re on. You cannot make progress without the support of the coaches, strength staff, training staff, academic staff, dining hall staff and so forth. The better support the team has, the fewer distractions the players will have as they seek to achieve their goals.

Call Up the Right Players

When it comes to building a successful team, the players are everything. You can have a distinct vision, a precise plan, plenty of resources and incredible leadership, but if you don’t have the right people, you’re not going anywhere. You can lose with good players, but you cannot win with bad ones.

Give Up Personal Agendas

Teams that win have players who continually ask themselves, “What’s best for the rest?” They continually set aside their personal agendas for the good of the team.
Step Up to a Higher Level

Only when players come together and give up their agendas can a team move up to a higher level. That’s the kind of sacrifice required for teamwork. Unfortunately, some people prefer to cling to agendas and picture the paths of their own inflated egos instead of letting go of them to achieve something greater than themselves.

People who think only of themselves are missing the big picture. As a result, their own potential goes untapped and the people depending on them are bound to be let down.

So how does a group of people start to become a more unified team? How do individuals make the shift from independent people to team players who exemplify the Law of the Big Picture?

It’s not something that happens over night. It takes time.