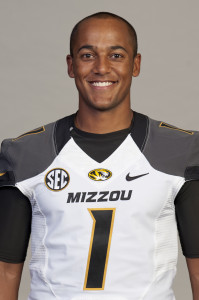 Mizzou senior quarterback James Franklin has been named as one of 16 semifinalists for the Earl Campbell Tyler Rose Award, an honor given to college football’s top offensive player with ties to the state of Texas.

Franklin led Mizzou to national prominence with regard to team offense, as the team was ranked No. 12 nationally in total offense (515.7 ypg) and No. 8 nationally in scoring offense (45.7 ppg) before Franklin sustained a shoulder injury against Georgia.

Franklin was also responsible for a 51 percent third down conversion rate, ranking Mizzou at No. 10 nationally in that respect.

Being out due to injury will be considered by the award panel with regard to looking at his numbers, as well as a variety of other factors such as integrity, performance, teamwork, sportsmanship, drive, community and tenacity. His ability to overcome injury would be considered a strong example of these standards.

Franklin will be in action two more times during the regular season. On Nov. 23 he will start against Ole Miss in Oxford, Miss., and on Nov. 30 his Missouri Tigers face Texas A&M for senior night at The ZOU. Both games will be televised nationally on ESPN at 6:45p.m. CST.