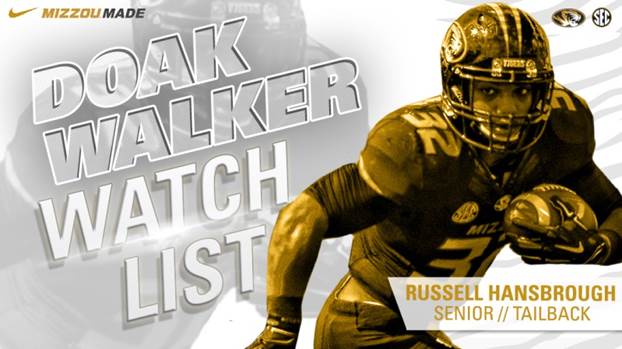 COLUMBIA, Mo. – Mizzou football’s Russell Hansbrough has been named to the 2015 Doak Walker Award Watch List as announced by the PwC Athletic Forum on Thursday, July 16. The Doak Walker Award is given annually to the nation’s top collegiate running back. This is the second major preseason watch list for Hanbrough, who landed on the Maxwell Award Watch List on July 7.

A veteran tailback who has rushed for nearly 2,000 yards in his Mizzou career, Hansbrough is on the Doak Walker Award Watch List for the first time in his career. He led Mizzou with his first 1,000-yard season in 2014, totaling 1,084 yards, a mark that ranked sixth in the SEC despite starting just three games – he was also seventh in the SEC in rush yards per game. Hansbrough was SEC Offensive Player of the Week and National Tailback of the Week following a 199-yard outburst at Texas A&M, the 10th-best single-game rush total in program history.

The PwC SMU Athletic Forum Board of Directors will name ten semifinalists on November 18, and the Doak Walker Award National Selection Committee will cast votes to determine the three finalists, who will be announced on November 24. The committee will cast a second vote beginning November 30 to determine the recipient. The National Selection Committee consists of past recipients, former NFL All-Pro and college All-America running backs, media members and selected special representatives.

The recipient of the 2015 Doak Walker Award will be announced live on The Home Depot College Football Awards on Thursday, December 10, on ESPN. The Doak Walker Award Presentation Banquet will be held in Dallas in early 2016.

The award, which will name its 26th recipient in 2015, is named for SMU’s three-time All-America running back Doak Walker. It is the only major collegiate award that requires all candidates to be in good academic standing and on schedule to graduate within one year of other students of the same classification.