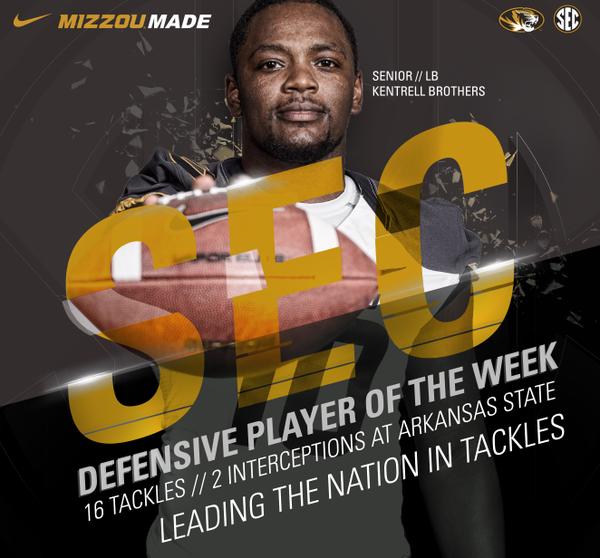 COLUMBIA, Mo. –Mizzou Football senior LB Kentrell Brothers has been named Southeastern Conference Defensive Player of the Week, as announced by the league office on Monday. An All-SEC performer last season, Brothers lived up to that billing on Saturday at Arkansas State. He tallied 16 tackles for the second consecutive week while pulling in a pair of fourth-quarter interceptions, helping preserve a 27-20 road win for Mizzou.

Brothers is the first Tiger to earn SEC Defensive Player of the Week since Markus Golden took home the distinction on Nov. 24 last season following his effort at Tennessee. It is the second time Brothers has earned this in his career with the first coming on Oct. 14, 2013, following Mizzou’s 41-26 win at No. 7 Georgia.

Brothers was a key cog in a Tiger defense that allowed just 37 yards of offense in the second half at Arkansas State, helping Mizzou rally from a 17-10 halftime deficit for its school-record 11th consecutive road win. Brothers added 1.5 tackles for loss in the win and his 16 tackles match his career-high, which he originally set in week one against Southeast Missouri. His final pick on Saturday sealed the win for Mizzou at Arkansas State and his 16 tackles are the fourth-highest at Mizzou during the Pinkel era.

Through two games, Brothers leads the nation in tackling and has 62 tackles over his last five games (12.4 per contest). His two picks last Saturday marked his first game with a pick since Oct. 12, 2013 at Georgia, and he now has five interceptions in his career. His two-interception performance was the first for Mizzou since S Braylon Webb achieved the same at Florida on Oct. 18, 2014. It is the 11th time a Mizzou defender has recorded two or more picks in a game since 1996. Brothers is just the third linebacker to add his name that list, joining Sean Weatherspoon (2 vs. Illinois on Aug. 30, 2008) and Brandon Barnes (2 vs. Texas Tech on Oct. 25, 2003).

Brothers and Mizzou will be back at The Zou this Saturday to face UConn in the Tiger Stripe game. Tickets to the UConn game are still available for as low as $25 and can be purchased online at MUTigers.com/buytickets or by calling 1-800-CAT PAWS. For all the latest on Mizzou Football, stay tuned to MUTigers.com and follow the team on Twitter @MizzouFootball and like us on Instagram and Facebook.