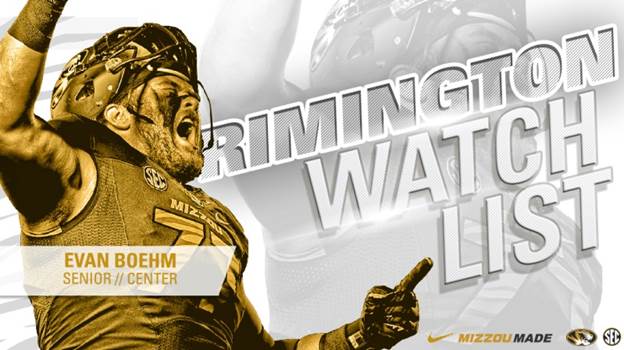 COLUMBIA, Mo. – Mizzou football senior center Evan Boehm has been named to the 2015 Rimington Trophy Fall Watch List, announced by the award’s committee on Wednesday, July 8. A three year starter for head coach Gary Pinkel, Boehm is one of 63 centers from across the country to be named to the list and one of eight from the SEC. The Rimington Trophy is presented annually to the nation’s most outstanding center. This is the third consecutive year that Boehm has been named to the list.

Boehm started all 14 games a season ago, anchoring an offensive line that was a key cog in an 11-3 season and a second consecutive SEC East Championship. He has started 40 consecutive games across the Mizzou offensive line, dating back to the 2012 season before shifting to the center spot full time in 2013. Boehm was a First Team Freshman All-American by College Football News at left guard in 2012.

The Rimington Trophy is presented annually to the Most Outstanding Center in NCAA Division I-A College Football. Since its inception, the Rimington Trophy has raised over $2.6 million for the cystic fibrosis community. The award is overseen by the Boomer Esiason Foundation, which is committed to finding a cure for cystic fibrosis and has raised over $115 million for CF Research.

Dave Rimington, the award’s namesake, was a consensus first-team All-America center at the University of Nebraska in 1981 and 1982, during which time he became the John Outland Trophy’s only double winner as the nation’s finest college interior lineman.