Boehm started all 14 games a season ago, anchoring an offensive line that was a key cog in an 11-3 season and a second consecutive SEC East Championship. He has started 40 consecutive games across the Mizzou offensive line, dating back to the 2012 season before shifting to the center spot full time in 2013. Boehm was a First Team Freshman All-American by College Football News at left guard in 2012. This is the second major award watch list that Boehm has landed on this summer after being named to the Rimington Watch List Wednesday.

The Outland Trophy winner is chosen from three finalists who are a part of the FWAA All-America Team. The FWAA All-America Committee, after voting input from the entire membership, selects the 26-man first team and eventually the three Outland finalists. Committee members, then by individual ballot, select the winner. Only interior linemen on offense or defense are eligible for the award; ends are not eligible. 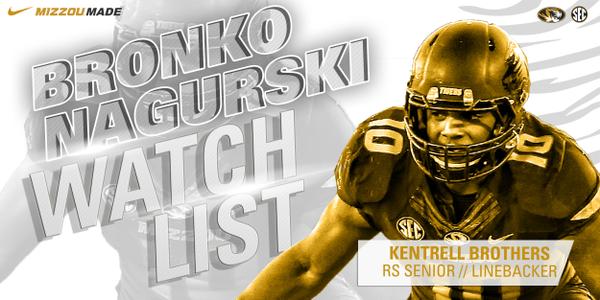 Brothers, the SEC’s top returning tackler from a season ago, is on the Bednarik Watch List for the first time in his career. The Bednarik Award has been presented to the College Defensive Player of the Year since 1995. Brothers accounted for 122 total tackles in 2015 (62 solo, 60 assists) while totaling 5.0 tackles-for-loss, four pass break-ups and a team-leading three forced fumbles. He started all 14 games a season ago and was an All-SEC Second Team pick by the Associated Press. This is Brothers’ second major watch list this summer after earning a spot on the Bednarik Award Watch List Tuesday.

The Bronko Nagurski Trophy winner will be chosen from five finalists who are part of the 2014 FWAA All-America Team. The FWAA All-America Committee, after voting input from the association’s entire membership, selects the 26-man All-America Team and eventually the Nagurski finalists. Committee members, then by individual ballot, select the winner, the best defensive player in college football during the FWAA’s 75th anniversary year.

The annual Bronko Nagurski Trophy Banquet, presented by ACN, will be held on Dec. 7 at the Westin Hotel in Charlotte. In addition to the 2015 Bronko Nagurski Trophy winner’s announcement, the banquet will also celebrate the recipient of the Bronko Nagurski Legends Award, sponsored by the CTC and Florida East Coast Railway. Ohio State’s Randy Gradishar, a member of the FWAA’s 1973 All-America team and a College Football Hall of Famer, will be honored.