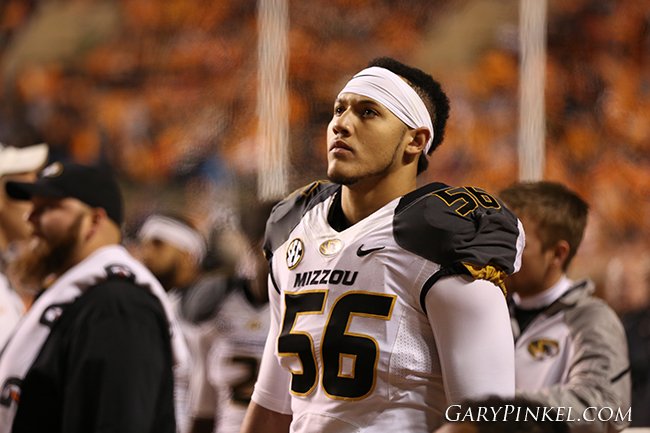 “It means you’ve been through it all,” Ray said. “You’re physical and you just have the mental toughness to get through anything.”

It’s safe to say the junior defensive end fits this description pretty well. Ray has posted a team-leading 13.5 sacks this season, breaking the record with his 13th, to help lead Mizzou Football’s strong defense this year.

Ray said being close to home was a major factor in his decision to come to Mizzou.

“To represent my home state, especially being from Kansas City, is a huge deal. It just means a lot to do something big for your home state,” Ray said.

But for Ray, being part of Mizzou is even greater than that.

“It’s everything,” Ray said. “You have your brothers, your coaches, and everyone else that works within the program. It just means a lot to have good people around you all the time.”

Ray has had a breakout season, and along the way he has skyrocketed up NFL draft boards as he continues to wreak havoc in opponent’s backfields.

Ray and the rest of Mizzou Football family will travel to Atlanta to take on Alabama this Saturday, December 6 for the SEC championship game. Kickoff is set for 3 p.m. CT and will be televised on CBS. Fans can follow Mizzou Football on Twitter, Instagram, and Facebook and listen in via Tiger Network radio affiliates for updates throughout the game.