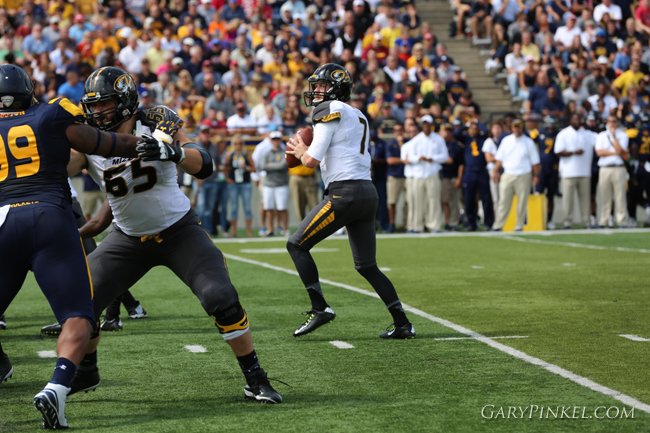 Mizzou Football starting quarterback Maty Mauk, being #MizzouMade means having the opportunity to develop himself as a person as well as a player.

“To be #MizzouMade means a lot,” Mauk said. “[No matter what the] responsibility, we have a top-of-the-line staff to do it and prepare us for the next game, as well as for life in general.”

This preparedness for life after football that Mauk talks about is something that Mizzou Football Head Coach Gary Pinkel strives to teach his players every year. The team’s four core values are honesty, treating women with respect, no drugs, and respecting cultural differences. While Pinkel and his coaches are still concentrated on the game aspect of a player’s development, helping each student-athlete to be a better person when they graduate from the program is just as important.

Another aspect of the Mizzou Football program that Mauk values is the family atmosphere.

“Everyone is open about everything,” said Mauk. “We’re each others brothers and are always going to have each other’s backs. The friendships that we’ve all built are something that not a lot of teams have.”

Every year at the beginning of the season, freshmen are given “big brothers” to help foster the family atmosphere. The student-athletes are also invited to Pinkel’s house for family dinners. This gives the players from all positions the chance to get to know one another, because most of them usually practice with just the players who share their position.

“I came to Mizzou because of the family atmosphere,” said Mauk. “When I came out here and met coach Pinkel and the staff, it was a completely different feeling than everywhere else I went in the country.”

Mauk was highly recruited out of high school, and was ranked the nation’s No. 16 quarterback prospect by ESPN. He chose to go to Mizzou over other highly competitive programs including Michigan, Notre Dame, Illinois, and Vanderbilt. In 2013, Mauk made four starts in place of injured starting quarterback James Franklin. Of those four starts, he was a three-time SEC Freshman Player of the Week, and he was named to the SEC All-Freshman Team. He also matched the school record for touchdown passes in a game with five against Kentucky. Mauk ended those four starts with 1,071 passing yards, 11 touchdowns, and a total of 229 rushing yards and one touchdown.

Mauk and the rest of the Mizzou Family will take on Texas A&M this Saturday, November 15 in College Station. Kickoff is set for 6:30 p.m. CT and can be seen on the SEC Network. Fans can follow Mizzou Football on Twitter, Instagram, and Facebook and listen in via Tiger Network radio affiliates for updates throughout the game.