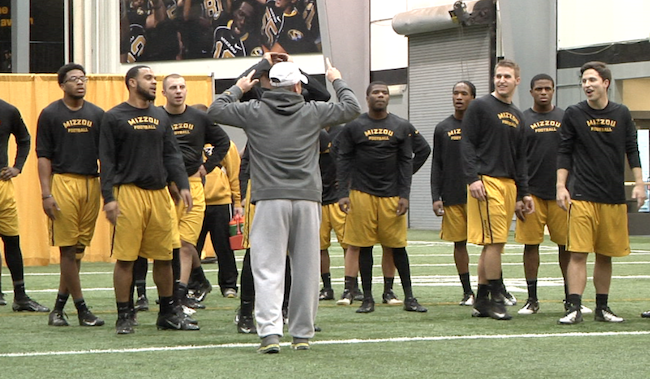 The Mizzou Football team completed their Winning Edge program for the 2014 season, one week before spring practices begin. We mic’d up Associate Head Coach Andy Hill to hear the demands and words of encouragement he shouted at the team throughout this the final day of the program.

“C’mon, it’s the last time!” Hill said as the team ran onto the turf field.

“Fake enthusiasm is better than no enthusiasm!” Hill joked.

Hill then began running and demonstrating the first drill of the day. As players raced, he shouted words of encouragement – “Good job, way to turn! Come on – finish, finish, finish!”

On Hill’s command, the players continued the agility drills running backward, tapioca-style and with high knees.

“Alright, tapioca!” Hill shouted. “As quick as you can go. First two guys, bend your knees.”

When the air horn sounded, signaling the end of practice, Hill erupted into a fit of excitement: “Oh my god! Oh my god!” he shouted. “Get outta here!”

With that, the players sprinted off the field, more energized and lively than when they ran on. Enthusiasm is key to everything in life – including the Winning Edge Program.