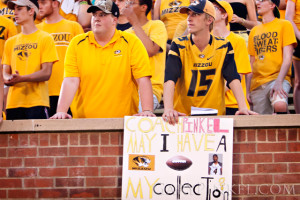 Nearly two years after tearing his ACL, MCL and patellar tendon, Henry Josey made his return to the ZOU against Murray State on Saturday night in Columbia, Mo.

Josey got by far the loudest ovation during pre-game introductions, and his performance on the field solidified why. The junior running back had 113 yards on 13 carries, including a 68-yard touchdown scamper in Missouri’s 58-14 rout of the Racers.

Missouri’s offense came out firing, as they quickly moved 20 yards on three plays.

The Tigers’ first touchdown came after a 75-yard drive that started with a perfectly thrown 44-yard pass from James Franklin to Dorial Green-Beckham and ended with a three-yard touchdown run by Russell Hansbrough.

After Murray State missed a 39-yard field goal, the Tigers became even more energized. In  only four plays and 59 seconds, Hansbrough continued his hot start with a 51-yard touchdown run, putting six more points on the board for the Tigers.

Mizzou put the hammer down after a touchdown from the Racers. The Tigers scored the last 17 points of the half that ended with a 43-yard field goal by Andrew Bagget.

Franklin led the charge with 318 yards passing and three touchdowns before coming out early in the third quarter. It’s the third career 300-yard game for Franklin, who was 26 for 38 and ended up seven yards shy of his career-best passing total against Baylor in 2011. He also had 50 rushing yards on six attempts.

Franklin distributed the ball well; his three touchdowns were thrown to three different receivers. Jimmie Hunt caught the first one with 11:22 left in the second quarter to give Mizzou the lead for good at 20-14. Franklin then threw two TDs in the first 5:09 of the second half, one to Darius White for 37 yards and one to L’Damian Washington for four yards to make it 44-14. In total, 11 different Tigers caught a pass. Jaleel Clark and Dorial Green-Beckham got the most action, with five receptions for 51 yards and four receptions for 83 yards, respectively.

While Mizzou was dominant through the air, they were even more impressive on the ground. The team gained a combined 358 yards rushing, and Josey and Hansbrough each surpassed the century mark. Hansbrough finished with 104 yards on eight carries and two scores, and Marcus Murphy and Morgan Steward each ran one in, too.

After gaining 196 yards on 11 first downs in the first quarter, the Racers only gained 101 yards for the rest of the game, due in large part to the suffocating coverage of the Tiger secondary, led by preseason All-SEC cornerback E.J. Gaines. Murray State’s Miller threw three interceptions, two to Gaines, against a defense that played up to SEC standards.

Missouri is 10-0 against FCS teams under coach Gary Pinkel. They beat Murray State 47-7 in 2006 in the two schools’ only other meeting. The Tigers will return to the ZOU next Saturday at 2:30 p.m. to take on the Toledo Rockets.