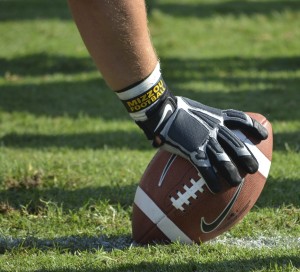 Time to hit the road, Mizzou fans! For the first time this season Missouri will play away from The Zou when it takes on the Indiana Hoosiers on Saturday at 7 p.m. in Bloomington, Ind.

It is shaping up to be a high-flying affair, with Missouri and Indiana both sporting two of the nation’s most prolific offenses. Missouri is averaging 48 points per game after impressive performances against Murray State and Toledo. The dynamic play on the offensive side of the ball has been a team effort, with quarterback James Franklin leading a balanced and effective air and ground attack. Indiana enters Saturday averaging 50 points per game, thanks predominately to a 73-35 rattling of Indiana State on opening night. Missouri ranks tenth nationally in offensive production per game. Indiana ranks sixth.

Quarterback James Franklin: The senior has bounced back spectacularly after an injury-plagued season in 2012, averaging 265 yards per game over the Tigers’ first two contests. The classic dual threat quarterback, Franklin has already rushed for 121 yards on the young season as well. Franklin’s leadership combined with the maturity of Missouri’s receiving corps, has resulted in a 155.1 quarterback rating for the senior. These numbers certainly prove he is back and healthy again. Missouri is 4-0 in games in which Franklin leads the team in passing and rushing yardage.

Tailback Henry Josey: Josey is already a third of the way to his career-high nine touchdown scores, a number he accumulated during his marvelous 2011 season in which he led the Big 12 in rushing at the time of his injury. It’s been a long, difficult road back from his multiple leg injuries, but Josey is contributing to the Tiger offense like he never left.

His 68-yard touchdown run against Murray State showed that his legs are not only fine, but they are also a force to be reckoned with.

The last time Missouri and Indiana faced off, many players on both teams weren’t even born. Saturday’s matchup marks the 11th all-time contest between the two schools in a series that dates back to 1953. Indiana leads 6-2-2, but the schools haven’t played each other since 1992, when Missouri was a member of the Big Eight Conference. Indiana has made only two bowl appearances since the last meeting, in 1993 and 2007. Missouri, on the other hand, has made 10 bowl appearances and recorded five victories.

With a victory, the Tigers will begin the season with a 3-0 record, which has historically been a very good thing for them. Three of the last four seasons Missouri has started 3-0, it ended in conference divisional titles. The last time this happened was 2010, when Missouri started 7-0 and finished with a 10-3 record and an appearance in the Big 12 North Co-Championship and Insight Bowl. A win at Indiana would also ensure Missouri’s seventh 3-0 start in coach Gary Pinkel’s 13-year tenure.

Indiana tied for ninth in the Big 10 conference last season with a 4-8 (2-6 conference) record. The Hoosiers are coached by Kevin R. Wilson, who is in his third season with the team. Indiana is 7-20 under his leadership.

Missouri is 5-2 in non-conference road games since 2003, the first of eight winning seasons under Pinkel. A victory will improve Pinkel’s record at Missouri to 93-61 and tie him with Dan Devine for the second most wins in school history.

The game will air on the Big Ten Network from Indiana’s Memorial Stadium in Bloomington. Big Ten Network subscribers can also live stream the game on the BTN2Go app via smartphone, tablet, or online.