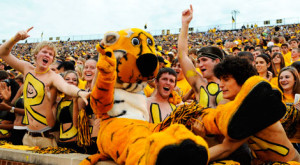 Florida enters the game ranked No. 22. The two teams have faced off only twice in history before. The first meeting was in the 1966 Sugar Bowl, which Mizzou won 20-18.

Both of Mizzou’s conference wins this season have come on the road, where they have looked not just comfortable but dominate. Before beating Georgia, the Tigers defeated Vanderbilt in Nashville 51-28. In total they are averaging 46.0 points in conference road play.

The offensive outburst has been the work of a variety of Mizzou skill players, including senior wide receiver and team captain L’Damian Washington, who led the charge at Georgia by catching seven passes for 115 yards and two touchdowns. Washington reeled in a 16-yard touchdown in the second quarter and a crucial 40-yard touchdown reception in the fourth, on which he outfought a defender hanging all over him. The score extended the Tiger lead to 34-26, and they never looked back.

Two of Washington’s catches came on third downs to extend drives that ended in Tiger touchdowns. The first was a 12-yard grab in the second quarter on a 3rd-and-10 from the MU 39-yardline, while the other was a critical 15-yard catch on 3rd-and-9 from the MU 26-yardline in the fourth quarter, with MU holding a slim 28-26 lead. His 40-yard TD catch would follow five plays later on the same drive. Washington’s seven catches against the Bulldogs pushed his 2013 total to 29, which surpasses his previous season-high of 25 set last season.

Senior quarterback James Franklin was brilliant against Georgia before exiting with a shoulder injury. Franklin threw for 170 yards and a touchdown and scored a rushing touchdown as well. He finished the Georgia game with 1,867 yards of total offense on the season and has already surpassed his entire 2012 production through just six games. Franklin has Mizzou’s offense ranked No. 12 in the NCAA in total offense (515.7 yards per game), No. 8 in scoring offense (45.7 ppg) and No. 10 nationally in third-down conversion rate (51.0%). Individually, Franklin ranks 22nd nationally and third in the SEC in total offense.

Franklin will be out for the Florida game with a shoulder sprain. Quarterback Maty Mauk helped guide the Tigers in Franklin’s absence, going 3-of-3 passing for 23 yards and gaining 12 yards on the ground. Mauk will make his first career start against the Gators. The redshirt freshman from Kenton High School in Ohio threw for 18,932 yards and 219 touchdowns and amassed 22,681 yards of total offense in his high school career. Those gaudy statistics put up by the dual threat quarterback earned Mauk Parade All-American honors as a senior.

Mauk will be aided by Mizzou’s three-headed rushing attack. Running backs Russell Hansbrough, Henry Josey and Marcus Murphy have all rushed at least 350 yards and three touchdowns. Both Murphy and Josey scored at the Georgia game. Look for them to be given the ball early and often versus Florida.

Florida will be trying to stop the run and so will Mizzou. Fortunately for the Tigers, their defense is loaded with playmakers having big seasons. Mizzou forced four Georgia turnovers last Saturday, including two fumbles and two interceptions. Defensive end Shane Ray forced the first fumble, which was picked up by defensive end Michael Sam and run in for a 21-yard touchdown in the second quarter. Later in the half, defensive tackle Lucas Vincent jarred the ball loose inside the MU 10-yard line, where defensive end Markus Golden fell on it.

In the fourth quarter, Mizzou’s back seven got in on the action, as safety Braylon Webb and linebacker Kentrell Brothers grabbed interceptions. Mizzou now has 13 interceptions through six games and is tied for the nation’s lead. The turnovers Saturday extended MU’s streak to 36 consecutive games having forced a turnover, the longest active streak in the nation.

With a win against Florida, Mizzou would start 7-0 for the second time in Pinkel’s 13-season tenure in Columbia. The last time Mizzou started 7-0, it went on to win the Big 12 North Co-Championship in 2010. The Tigers finished 10-3 that season.