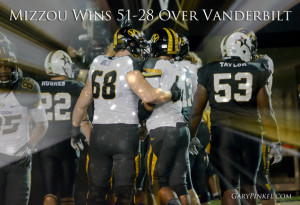 The Missouri Tigers continued their undefeated season with a 51-28 thumping of Vanderbilt in their SEC opener in Nashville on Saturday night.

With the win, Mizzou improves to 5-0, making them the only remaining undefeated team in the SEC East. Vanderbilt, which won last year’s matchup 19-15 at the ZOU, slipped to 0-3 in conference play and 3-3 overall.

James Franklin continued his resurgence as he played another flawless game. He completed 19 of 28 passes for 278 yards and four touchdowns while adding 63 yards rushing on 12 carries. Coach Gary Pinkel, who has now led the Tigers to five 5-0 starts, isn’t surprised at all by the quarterback’s hot start.

“James has been around a little bit,” Pinkel said. “If he had stayed healthy last year, he would have played like this. This doesn’t surprise me. I loved him last year. I’m very proud of him … He is playing with some of the best quarterbacks, I think it’s fair to say that.”

Mizzou’s explosive offense couldn’t be stopped through three quarters, as each of its first six possessions resulted in points.

The Tigers wasted no time putting points on the board. Franklin and L’Damian Washington found the end zone from 26 yards out on the fifth play of their opening possession, culminating a 75-yard drive that took just one minute and 17 seconds.

The Mizzou defense came out firing as well. It held the Commodores to just 7 yards on their first three possessions. After forcing a punt their first time on the field, linebacker Kentrell Brothers picked off Vanderbilt’s quarterback at the Vanderbilt 26, setting up Franklin’s second passing touchdown of the day on the next play.

The interception was Mizzou’s 11th on the season, the second highest total in the nation. The pick also extends the Tigers’ national-best streak of consecutive games with a turnover to 35.

Another Vanderbilt three-and-out and an Andrew Baggett 29-yard field goal made it 20-0 Mizzou before the end of the first quarter. The Tigers out-gained the Commodores 285-97 in the first half and took a comfortable 30-7 lead into the locker room.

Vanderbilt scored on its first drive of the second half, but Mizzou answered right back when Henry Josey capped off another 75-yard scoring drive with a 1-yard rushing touchdown. That was the theme of the second half, as the Tigers responded to every Commodore score with seven points of their own to maintain plenty of cushion.

Mizzou’s spread attack was extremely balanced once again, gaining 278 yards through the air and 245 on the ground en route to another offensive explosion. Washington led the receiving core with two touchdown grabs and Marcus Lucas hauled in another. Tight end Eric Waters even got in on the action, making three catches for 39 yards and a touchdown.

“We feel like we can beat anybody when we come out like that,” Waters said of the Tigers’ start. “All the hard work we put in really pays off when we can translate it to the field. We’ve been putting in weeks of hard work, trying to get to that next level, and I think we’re getting closer.”

On the ground, the triple threat of Josey, Marcus Murphy and Russell Hansbrough continued to establish itself as one of the most lethal backfields in the SEC. Josey led the charge with 14 carries for 69 yards and two touchdowns. The speedy Murphy only needed four rushes to gain 69 yards of his own, and Hansbrough made defenders miss left and right with his nine runs that totaled 44 yards. Missouri’s 258.8 rushing yards per game and 16 rushing touchdowns are tops in the conference.

The Tigers also lead the SEC East in sacks, thanks in large part to defensive lineman Michael Sam’s emergence in the past two games.  Sam picked up his second consecutive three-sack performance at Vanderbilt, earning him his second straight SEC Defensive Lineman of the week award. As a team, Mizzou brought down Vanderbilt’s quarterback seven times behind the line of scrimmage.

The No. 25-ranked Tigers continue their SEC schedule against No. 7-ranked Georgia this Saturday in Athens, Ga.