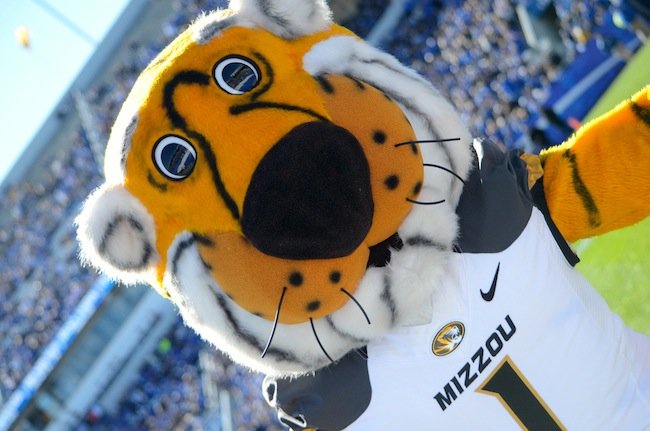 On Tuesday afternoon, August 19, The Crossing in Columbia was decked out in black and gold stripes as it hosted the Mizzou Football Staff and the Food Bank of Central and Northeast Missouri in celebration of “20 Seasons of Tackling Hunger.”

The Food Bank of Central and Northeast Missouri partners with growers, retailers, restaurants, wholesalers, manufactures, and processors and encourages them to donate food instead of throwing it away. The Food Bank not only partners with people in the community, but it also runs a variety of programs to help get food in the hands of people who desperately need it.

SCORE Against Hunger is The Food Bank’s annual campaign, and Mizzou Football and Head Coach Gary Pinkel have been working alongside the organization for 20 seasons to fight hunger in the community. Since the campaign’s launch in 1995, it has raised more than $6.3 million. In the 2012 season alone, the SCORE Against Hunger movement raised more than $675,000, which provided more than 7 million meals to hungry people in the state of Missouri. The money donated to the program buys food for 131 different organizations in order to feed Missourians in need.

David Nivens, 2014 SCORE Committee Co-Chair Member, welcomed the large group of football gurus, Food Bank directors, and donors to the celebration. He praised the work already accomplished by the campaign, and looked forward to the upcoming year with hope and determination.

“This is a one-of-a-kind program,” Nivens said. “I know we will do well this year and break records again.”

Nivens had nothing but praise for the citizens of Columbia. “We live in one of the most generous communities in the country.” 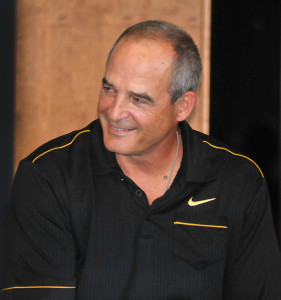 attended the luncheon, and took part in a “Tiger Talk” segment alongside Gary Link, a broadcaster and special assistant to the Athletic Director for Mizzou Basketball. Before the interview began, Link shouted an “M-I-Z,” which was followed immediately with an enthusiastic “Z-O-U” from the audience.

The “Tiger Talk” segment was a great opportunity for Coach Pinkel to inform the donors and Food Bank partners of the upcoming 2014 football season and to thank the audience for their involvement with the SCORE Against Hunger Campaign. Coach Pinkel discussed how important it is that each football player who plays in The ZOU grows not just athletically, but also personally and academically. The players are not just on a journey to become better athletes, but they are also being shaped into leaders.

“The greatest form of leadership is leading by example,” Pinkel said.

Coach Pinkel concluded Tiger Talk by addressing the donors and volunteers in the audience.

“I am very appreciative of all of you involved,” he said. “You are competitive people as well. It is so mammoth what you are doing here.”

Peggy Kirkpatrick, the executive director of The Missouri Food Bank, brought the luncheon to a close with a heart full of gratitude. “For all of those thousands of kids you helped us feed, thank you. God bless you, and go Tigers!”