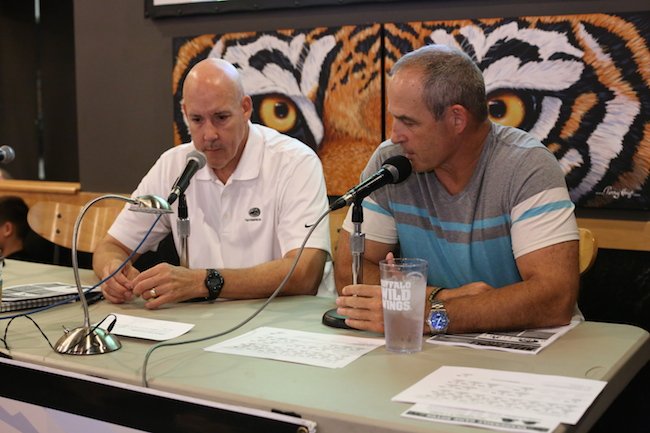 Pinkel began by talking about Mizzou’s 42-13 victory over the Florida Gators and explained how important special teams were in earning the win.

On the defensive side, junior defensive end Shane Ray had another big game, racking up two sacks and six tackles on his way to SEC defensive lineman of the week honors.

Mizzou takes on Vanderbilt for its annual Homecoming game on Saturday, October 25. Fans are encouraged to “Tiger Stripe” The ZOU by wearing the corresponding color to their section.

“This could be really cool,” Pinkel said. “This is the first time we’ve ever done it and I think we could do it every year and I think it’d be very special.”

McGovern and Brothers then joined Mike Kelly at the desk at Buffalo Wild Wings to talk about their victory over Florida. A couple kick returns and defensive touchdowns had Mizzou up big and Florida fans leaving early on Saturday, a goal for most road teams.

“That’s a great feeling,” McGovern said. “There’s not a whole lot better feeling than that because that’s really when you know you can really step on them.”

McGovern, originally from Fargo, North Dakota, then touched on his recruiting trail to Mizzou.

Brothers, a Guthrie, Okla., native, mentioned how his mother has been able to come to every game except for one home game and one away game.

“Yeah, I mean she loves football,” he said.

But McGovern said his dad goes one step further than that.

“My dad is pretty much what you call a super fan,” he said. “I don’t know if there is anyone out there who gets more excited about Missouri football than my dad.”

Coach Pinkel rejoined Kelly to talk about the importance of winning at The ZOU.

“A win streak on the road is nice,” Pinkel said. “But I want a win streak at home. This is a hugely important game for many reasons.”

See Tiger Talk live at 7 p.m. every Monday at Buffalo Wild Wings, or watch online via the GaryPinkel.com livestream.

Mizzou Made in the NFL: Week 7
Scroll to top